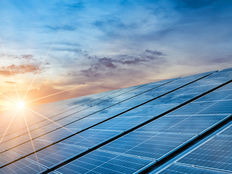 Sunny Solar View Could Shine on This ETF

The outlook for global solar PV installations is impressive of this year and 2022, indicating that there’s at least one catalyst for renewable energy exchange traded funds to lean on.

That’s good news for the ALPS Clean Energy ETF (ACES A-). ACES is a diverse ETF — it features exposure to nine green energy concepts — but solar is by far its largest industry weight at 25.47%, as of Nov. 15. In other words, ACES is more than adequately levered to compelling solar installation forecasts.

“Global solar PV installations will see double-digit growth in 2021 and 20% growth or more in 2022 and surpass the 200 GWdc barrier for the first time,” according to a new report by the Clean Energy Technology service at IHS Markit. “Total investment in 2022 will be least $170 billion.”

Previously, declining costs were among the factors facilitating increasing adoption of solar power. However, supply chain issues and elevated commodities prices prompted a modest uptick in solar costs this year. Still, burgeoning global demand for renewable energy could be the spark that solar companies need to work past cost concerns.

“Installations in key markets such as China, India, US, and Europe are driving expansion in 2021 and in 2022, with the highest growth coming from the distributed generation segment, led by China,” adds IHS Markit.

That said, political policy remains a potential catalyst or headwind for broader solar adoption. In the U.S. and Europe, the political environment is conducive to more solar acceptance. Additionally, many renewable policies are set at the local and regional levels. Those are pluses for ACES’ solar components. However, emerging economies need to step up their renewables efforts to better fight climate change.

Regarding that effort, coupled with ACES’ solar exposure, there is some good news. Despite this year’s cost increases, solar remains efficient and cost-effective.

“"Despite the two-year impasse in solar PV cost decline, solar continues to be one of the energy technologies with the lowest capex and is the fastest energy source to install," said Edurne Zoco, executive director of clean energy technology at IHS Markit. “Over 1,000 GWdc of new solar installations are expected to be installed [globally] through 2025, driven by solar technology competitiveness, versatility, and installation speed, that will be instrumental to contribute to the decarbonization of the power system this decade.”