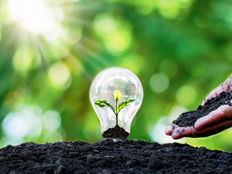 As 2021 is showing, the transition to clean energy and carbon-neutral concepts will encounter bumps, but that doesn’t dent the long-term thesis for exchange traded funds like the ALPS Clean Energy ETF (ACES A-).

A significant part of the reason that ACES and other renewable energy ETFs are scuffling this year is that many governments around the world got caught flat-footed in the energy transition and are turning to fossil fuels, including coal and natural gas, to plug gaps in power portfolios.

“The transition to net zero so far has been lopsided, as clean energy investment has not increased enough to make up for the decline in fossil fuel investment. Futures markets are pointing to lower coal and gas prices by the end of next year. Much depends on the temperature in the coming winter. And while the transition remains lopsided, we can expect more volatility of energy prices, inflation and economic activity in future,” according to BlackRock research.

This year’s renewables vs. fossil fuels tug-of-war underscores some important points. First, governments likely need to be more pragmatic in the transition to renewables, ensuring that there are backup sources available and not rushing to market for those sources in emergencies. Second, it’s clear that governments that remain committed to renewables are willing to spend to that effect — an obvious plus for ACES.

“There has been massive investment in clean energy – an average of $1 trillion a year between 2016 and 2020 according to the International Energy Agency (IEA). More is needed to build a clean, resilient energy infrastructure. A net-zero transition by 2050 will require an average annual investment of nearly $4 trillion between 2026 and 2030, says the IEA,” adds BlackRock.

At the end of the day, there’s no denying that the renewable energy transition is taking hold, and that brings with it positive long-term implications for ACES. However, investors cannot expect this transition to be constantly smooth.