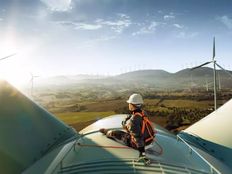 The ALPS Clean Energy ETF (ACES A-) rallied earlier this month as high energy prices, resulting from the Russia-Ukraine conflict and ensuing sanctions, have global governments scrambling for alternative energy solutions, according to ALPS.

The electric vehicle companies included in ACES – comprising 28.49% of the fund – rose over 2% after the Biden administration invoked The Defense Production Act with $750 million to boost U.S. production of materials needed for EVs and EV infrastructure, ALPS wrote in an insight.

A potential cease-fire in the Russia-Ukraine war last week was also positive for EV names as Russia accounts for nearly 20-30% of global nickel and palladium production that goes into lithium-ion EV batteries, according to Mining.com.

The hydro/ geothermal holdings in ACES have also risen, propelled by Brookfield Renewable Partners LP. (BEP-U CN, 4.83% weight) gaining over 3% after inking a $300 million investment agreement with Entropy Inc. to scale its carbon capture technology, according to ALPS.