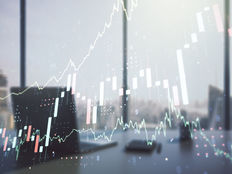 As one of the primary (and most discussed) investment factors, low volatility and exchange traded funds like the Invesco S&P 500 Low Volatility ETF (SPLV A+) don’t jump off the screen as contrarian ideas.

However, low volatility is like any other factor – growth, value, etc. – in that there are times when it’s in favor and times when it’s a laggard. There are opportunities for investors to view SPLV as a contrarian idea and some market observers hypothesize that moving away from stocks that are favored by the masses can lead investors to value.

“The market’s imperfect nature creates opportunities for those with dissenting views,” writes Morningstar analyst Daniel Sotiroff. “Moving away from trendy stocks pushes an investor’s portfolio toward the less-loved and mundane—types of stocks that typically trade at lower valuations.”

The $7.94 billion SPLV turned 10 years old in early May, meaning it’s been through a variety of factor leadership changes. During the bulk of SPLV’s time on the market, growth stocks easily outpaced value rivals, though regime change on that front arrived the latter stages of 2020 and is extending into this year.

Growth names often sport above-average volatility. As such, a fund like SPLV may lean toward value fare, although the strategy isn’t explicitly dedicated to holding under-valued stocks.

Eschewing trendy but turbulent stocks “often leads to a value orientation, though the degree to which low-volatility strategies emphasize stocks trading at lower multiples is less pronounced and less consistent than a fundamentally weighted portfolio,” adds Sotiroff.

To be sure, there are times when a low volatility strategy will sport valuations that are in line with or above those of the broader market. For its part, SPLV is sector-agnostic, but it frequently features large weights to defensive sectors, such as consumer staples and utilities. Those groups often command premium valuations due to their defensive traits. Still, there are instances of a rise in volatility leading to SPLV to more of a value tilt.

Today, SPLV allocates 34% of its weight to value stocks with about 10% in growth names. Another perk of SPLV is that it’s not going out of its way to capture value, meaning it usually keeps investors away from value traps.