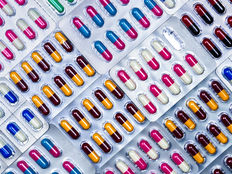 The Invesco Dynamic Pharmaceuticals ETF (PJP B) is off 3.66% month-to-date, and the source of that lethargy is easy to spot: The drug price reform debate is once again gaining momentum, prompting investors to take a cautious approach to pharmaceuticals stocks.

While the healthcare sector and pharmaceuticals stocks in particular have histories of being sensitive to political wranglings, PJP’s recent weakness could ultimately prove to be a buying opportunity. In fact, given the current political climate, PJP’s September slide may be much ado about nothing.

Recent headline risk may also be serving some benefit as some PJP holdings now look attractive on valuation, with biotech giant Gildead (NASDAQ:GILD) being a prime example.

Gilead Sciences is PJP’s second-largest holding at a weight of 6.13%. Another PJP holding earning praise from Morningstar is Merck (NYSE:MRK), a member of the Dow Jones Industrial Average. While Merck isn’t one of the pharmaceuticals names with exposure to coronavirus vaccines, its new drug pipeline is robust.

“Merck’s combination of a wide lineup of high-margin drugs and a pipeline of new drugs should ensure strong returns on invested capital over the long term,” according to Andersen. “Further, following the divestment of the Organon business in June 2021, the remaining portfolio at Merck holds a higher percentage of drugs with strong patent protection. On the pipeline front, after several years of only moderate research and development productivity, Merck’s drug development strategy is yielding important new drugs.”