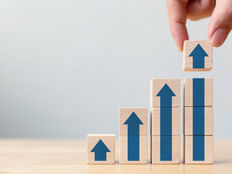 It’s been a good year for value stocks and an even better year for their deep value counterparts. For example, the Invesco S&P 500 Pure Value ETF (RPV B+) is up more than 30% year-to-date, beating the S&P 500 Value Index by more than 1,100 basis points.

Investors considering RPV today ought to monitor the situation in capital spending, which is a departure from previous economic recoveries.

“This capex recovery stands in sharp contrast to prior cycles, given the steepness of the inventory decline. While a drawdown in inventories (relative to shipments) is typical as capex accelerates, this cycle has seen inventories decline at four times the average rate due in part to bottlenecked supply and pent-up demand, but also a result of a pickup in wage growth and government stimulus payments,” according to Fidelity research.

The $2.66 billion RPV has some exposure to the reopening trade and consumer spending with an almost 10% weight to consumer cyclical stocks. What’s also potentially relevant to this ETF’s near-term fortunes, as was seen earlier this year, is action in 10-year Treasury yields. Rising yields often favor value stocks.

“10-Year Treasury yields plunged more than 20% from May through August—a rare event that has occurred just 3% of the time historically,” adds Fidelity. “In the past, declines of this magnitude have resulted in higher yields over the next six months a majority of the time, but 96% of the time when the U.S. economy avoided a recession over the next year.”

RPV’s status as a beneficiary of rising 10-year yields is easy to identify. The Invesco fund allocates 44.15% of its weight to rate-sensitive financial services stocks — by far its largest sector exposure. Fortunately for investors considering positions in RPV, there have historically been solid correlations between value equities and rising bond yields.

“Like strong capex growth, higher interest rates often signal a robust economy and thus provide a solid backdrop for value stocks. In fact, the correlation between growth in investment spending (a key component of GDP) and 10-Year Treasury yields has been 0.74 over the past 10 year,” concludes Fidelity.

Another RPV perk is its heavy mid-cap exposure at a time when those stocks are performing well and beating small-caps. The fund devotes 63% of its weight to mid-cap equities, a group with robust cyclical exposures.