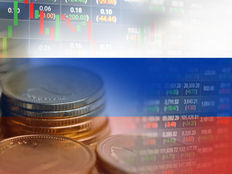 Everything to Know About Russia’s Closed Market

Concern has overwhelmed investors as they wonder how much the implications of the Russia-Ukraine war will impact their portfolios.

The Moscow Exchange remains closed, and the Russian ruble has been in freefall after the West imposed crippling sanctions on Russia in response to Vladimir Putin’s invasion of Ukraine. The ruble is now worth less than a cent against the U.S. dollar.

What happens when the Russian market reopens depends largely on what basis MOEX reopens.

“If they open with foreign capital restrictions, then the GDR listings are likely in violation of their continuous listing requirements,” Dave Nadig, CIO and director of research at ETF Trends and ETF Database, said. “That means all those GDRs become delisted securities and nobody can really own them in a regulated vehicle.”

If, somehow, MOEX fully reopens and the GDRs reopen, then the situation is just price discovery in the middle of a war.

“At that point, a decision to, say, buy RSX is less about ‘getting Gazprom cheap’ and much more about ‘do you believe that at the end of this crisis foreign ownership of Russian infrastructure will even be allowed.’ Personally, I don’t,” Nadig said.

Investors’ concerns of how much Russia occupied their portfolios prior to the collapse is top of mind.

Nadig said that most advisors have their clients in some amount of emerging markets exposure, and most of that had about 3% in Russia going into the invasion, making the implication to the average investor minimal.

“If you had a 10% EM allocation in your portfolio, and 3% of that goes to literally zero, then your net portfolio impact is 30 basis points of performance,” Nadig said. “Nobody likes that, but it’s hardly crushing anyone’s 401(k).”

While the situation continues to unfold, and the international (and corporate) reactions have been so fast and so dramatic that the follow-up effects are extremely difficult to predict, many questions remain.

“Europe starts planting pretty soon — where are they going to get fertilizer? Will Russia ever make coupon payments on debt again? Who has how much leverage to those securities and other Russian assets that are at minimum encumbered, and potentially worthless? None of this is actually knowable with certainty. It’s a setup for a lot of idiosyncratic volatility in almost every asset class internationally. And of course, COVID taught us we don’t live in a vacuum, so what affects the ex-U.S. world gets to us eventually,” Nadig said.