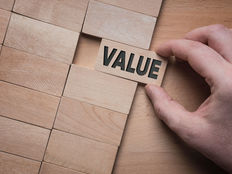 For Value Boost, Turn to 'SPVU'

When emphasizing a single factor, be it growth, size, value, or others, investors are, to an extent, expressing a tactical view.

Sometimes, it pays to get even more tactical to enhance a factor’s potency. When it comes to adding a bit more to the value investing proposition, the Invesco S&P 500 Enhanced Value ETF (SPVU B) checks plenty of boxes.

SPVU, which turns six years old in October, follows the S&P 500 Enhanced Value Index. That benchmark “tracks the performance of stocks in the S&P 500® Index that have the highest ‘value score,’” according to Invesco.

More succinctly, SPVU goes deeper into value than some traditional value funds and indexes. That leads to a higher bar for entry and a leaner lineup. For example, SPVU holds 101 stocks – far less than the 433 residing in the S&P 500 Value Index.

Those data points confirm SPVU is very much a case study in the saying “methodology matters.” The Invesco fund and the aforementioned VTV share 88 holdings, but that overlap by weight is a tolerable 25%, according to ETF Research Center data.

Another testament to SPVU’s benefits is that although its holdings are weighted by market capitalization, its more-discerning approach to identifying value stocks leads it into smaller names. For example, over a third of the fund’s holdings are classified as mid caps.

With a 41.33% weight to financial services stocks, SPVU positions investors to capitalize on a potential rebound in 10-year Treasury yields and the possibility that the Federal Reserve will soon signal an end to its dovish ways.

That allocation also levers SPVU investors to what’s now an increasingly positive dividend story in that sector. On a related note, SPVU devotes 27% of its combined weight to the healthcare and consumer staples sectors – two groups with deep quality traits and enviable track records of dividend growth. To that end, SPVU has a 12-month distribution rate of 2.08%, which is slightly ahead of the S&P 500 Value and well ahead of the S&P 500.