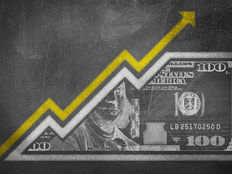 In recent weeks, concerns have escalated that real inflation is rising. Typically, investors do not think of sector and industry exchange traded funds as inflation-fighting tools. They may want to reconsider with the Invesco Aerospace & Defense ETF (PPA B+).

PPA seeks to track the investment results (before fees and expenses) of the SPADE® Defense Index. The fund generally will invest at least 90% of its total assets in the securities that comprise the underlying index, which is composed of common stocks of companies that are engaged principally in the development, manufacture, operation, and support of U.S. defense, military, homeland security, and space operations.

At a time of rising inflation, PPA is worth considering because aerospace and defense stocks reside in the industrial sector, a group known for performing well when inflation ticks higher.

“The industrials sector is the third most-sensitive to changes in interest rates, out of the more than 10 sectors in the S&P 500,” reports Jacob Sonenshine for Barron’s.

Yields on Treasury inflation-protected securities (TIPs) recently turned positive, confirming that inflation is something advisors and investors need to prepare for.

Some market participants are concerned that the Fed may have to change its interest rate policy sooner than expected. These doubts certainly contributed to last Wednesday’s equity pullback. Inflation fears are further reflected by a sharp rise in benchmark Treasury yields, which may be partially attributed to expectations for greater inflation.

PPA skews its holdings toward large cap companies, which is what you want when diving for quality. With a lot of market uncertainty still lingering, large caps can help mute the effects of a downturn better than their small cap brethren.

“Aerospace giant Boeing (BA) is second on Evercore’s list, with a 72% correlation with the 10-year Treasury yield. The stock is up 45% since Sept. 23,” according to Barron’s. “It has been more than twice as volatile than the S&P 500, partly because it supplies the airline industry, which has been decimated by the pandemic. However, an eventual pickup in air travel should be good news for Boeing, which saw its orders and deliveries stall during the pandemic and after its 737 MAX was grounded in 2019.”