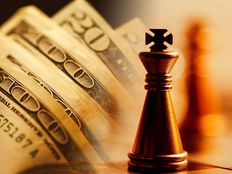 While there’s ample talk of the dollar losing its status as the world’s reserve owing to ballooning debt in the U.S., there’s no denying that the greenback is among this year’s best-performing major currencies.

That underscores the effects of rising interest rates and a risk-off sentiment on equity markets. The proof is in the pudding, and the Invesco DB US Dollar Bullish (UUP B) is higher by 5.35% year-to-date while the S&P 500 and nearly every fixed income exchange traded fund are in the red.

UUP, which raced to a 52-week high on Tuesday, follows the Deutsche Bank Long USD Currency Portfolio Index. That gauge measures the dollar’s performance against a group of other major currencies, including the euro, Japanese yen, British pound, Canadian dollar, Swedish krona, and Swiss franc. Speaking of the yen, the dollar is drubbing the Japanese currency.

“The dollar surged on Tuesday to a 20-year high against the Japanese yen, underpinned by the divergence in monetary policy between a Federal Reserve determined to keep a lid on soaring inflation and a Bank of Japan that has kept interest rates ultra-low,” reports Reuters.

That’s relevant to investors considering UUP because the yen is the Invesco fund’s second-largest exposure at 13.60%, according to issuer data.

“Morgan Stanley, in its latest research note, said the yen’s decline versus the dollar was justified amid Japan’s worsening terms of trade, with soaring raw materials driving up import costs, as well as contrasting inflation outlooks between the countries,” adds Reuters.

The dollar is also flirting with a two-year high against the euro. Foreign currency market observers suggest that this is another case of diverging monetary policies, as the European Central Bank (ECB) isn’t likely to raise interest with the intensity of the Federal Reserve.

Providing some support for the dollar and UUP, the Fed boosted borrowing costs by 25 basis points last month. However, experts and perhaps some Fed members believe that the central bank was late in acting to damp inflation. That could be a signal that the pace of rate hikes will increase, perhaps as soon as the May FOMC meeting.

Added dollar strength against the euro would likely fuel more upside for the $1.04 billion UUP because 57.6% of the fund is weighted against the common currency. UUP turned 15 years old in February.