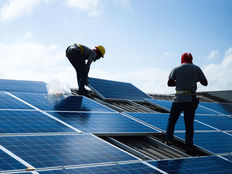 The U.S. Department of Energy (DOE) wants to lower solar costs, and that could be a long-term boon for the Invesco Solar ETF (TAN B).

TAN seeks to track the investment results of the MAC Global Solar Energy Index, which is designed to provide exposure to companies listed on exchanges in developed markets that derive a significant amount of their revenues from solar power equipment producers, including ancillary or enabling products.

“Building on an Obama administration initia­tive, the US Department of Energy 25 March set a goal of cutting the cost of solar energy by 60% within the next 10 years through a research and development program that will provide nearly $128 million to advance new technologies, includ­ing perovskite-based thin-film modules, which are seen by researchers as one of the most promising innovations in the field,” according to IHS Markit.

Lower costs for renewable energy endeavors are viewed as crucial to long-term adoption. Fortunately, costs are declining, and the DOE solar effort could spur that process along.

As the world moves more towards renewable energy sources, solar energy could be one of the main beneficiaries. According to a United States Solar Energy Market – Growth, Trends, and Forecasts (2020 – 2025) report, more growth is ahead over the next five years.

“The United States solar energy market is expected to grow at a CAGR of 17.32% during 2020-2025,” the report noted. “Factors, such as solar PV projects under construction, in the pipeline and planning stages, and supportive policies of the government are expected to boost the cumulative installed capacity of solar energy during the forecast period.”

Boosting the long-term cases for TAN are data confirming solar and wind installation prices will continue declining in the coming decade. Renewables prices could increase due to the coronavirus, according to some market observers, but the consensus appears to be that the spike will be short-lived, if it arrives at all.

“The Biden administration initiative follows the path laid by the Obama administra­tion’s successful SunShot program, which was launched in 2011 as a program to slash the unsubsidized levelized cost of energy (LCOE) of utility-scale solar PV by 2020. That program met its initial target of 6 cents/kWh in 2017, at which point DOE set a new LCOE target of 3 cents/kWh by 2030,” concludes IHS Markit. “But with solar’s LCOE now at about 4.6 cents/kWh, DOE said a more ambitious target was needed to meet the Biden admin­istration’s ambitious goal of a 100% clean electricity grid by 2035.”