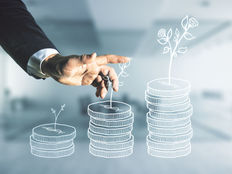 Seed Capital: Why Does It Matter?

What Is Seed Capital?

Seed capital is the initial funding that allows an ETF to launch and become available to investors. The seed capital is used to fund the creation units that underlie the ETF so the shares can then be offered and traded in the open market.

Historically, most seed capital is provided by banks and broker-dealers, but many ETFs have been self-seeded as well. Self-seeded ETFs are generally funded with either new capital or with assets from separate accounts and other investment vehicles offered by the firm.

How much seed capital is needed for an ETF launch is dependent on several factors and can differ significantly. A general guideline suggests looking for seed capital that covers at least the operational cost of the new fund.

While the standardized operational expenses of maintaining an ETF can vary, according to Toroso Investments, a good rule of thumb is to assume a cost of about $20,000 a month, or $240,000 a year.

Why Does Seed Capital Matter?

In addition to enhancing the viability of the new ETF, weighty seed capital supports the on-screen liquidity and capital markets strength, both critical factors in encouraging allocators to invest in the new fund.

While seed capital is largely deemed as one of the most important factors in a new fund’s success in attracting new assets, significant seed capital will not guarantee that the fund is successful. There have been many instances in history where an ETF has launched with notable seed capital and still failed to gain traction among investors due to unrelated obstacles.

Although more infrequent, the opposite has also been observed, as displayed when the first-to-market bitcoin futures ETF, the ProShares Bitcoin Strategy ETF (BITO ), launched in October 2021 with just $20 million in seed capital and then hauled in $550 million from investors on day one.