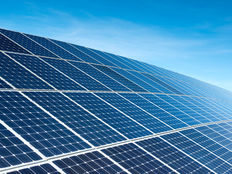 Solar Stocks Can Shine, Despite Cost

The ongoing renewable energy boom, which is just ramping up, is putting TAN and its components in the spotlight. That’s only being enhanced by another summer of escalating temperatures and storms, such as Hurricane Ida, which are fuel for the climate change conversation.

With the climate change conversation continuing and solar costs decreasing, TAN and its components have ample long-term tailwinds. However, investors new to solar equities need to realize that the group is a growth segment and rarely on sale. For example, TAN trades at 40.73x forward earnings, according to Invesco data.

On a related note, Morningstar analyst Brett Castelli points out that several solar stocks that the research firm recently initiated coverage on, including some TAN components, trade above the firm’s fair value estimates. That includes Enphase Energy (ENPH), TAN’s largest holding at a weight of nearly 11%. Fortunately, Enphase offers a compelling growth story.

“Enphase is the world leader in microinverters, which convert direct current produced by solar panels into alternating current used by homeowners. Its primary end market is U.S. residential, which accounted for 80% of 2020 sales, but it plans to expand internationally and enter the small commercial market. We see the company in the early innings of a longer-term transition from a supplier of microinverters to a supplier of home energy systems: solar, storage, and software,” according to Castelli.

SolarEdge Technologies (NASDAQ:SEDG), which is TAN’s second-largest component at a weight of 10.58%, is another example of solar stock that’s pricey, but also has growth potential and a diversifying revenue stream.

“We forecast five-year revenue growth of 21%, driven by rising solar installations coupled with strong growth in the storage and e-mobility segments. We see solar composing less than 70% of 2020 revenue versus more than 90% in 2020,” adds Castelli.

FirstSolar (NASDAQ:FSLR), one of the biggest US-based solar module providers, recently departed the operations and maintenance businesses to focus on modules. It’s another TAN component that’s not cheap, but sales growth could be impressive going forward.

“We forecast continued average selling price declines (2.5% annually) and a modest increase in gross margins to 24% from approximately 22% today. Over the coming quarters, investors should keep watch on proposed domestic manufacturing incentives in the U.S. If these are enacted, First Solar would be well positioned to benefit,” concludes Castelli.