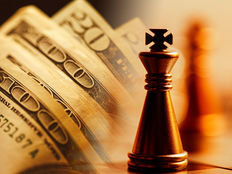 Some traditional hedges and protective assets just aren’t getting the job done this year. Investors searching for greener pastures (pun intended!) may want to consider a familiar friend in the form of the U.S. dollar.

The Invesco DB US Dollar Index Bullish Fund (UUP B) is up nearly 4% year-to-date and is less than 2% below its 52-week high. The $468 million UUP follows the Deutsche Bank Long USD Currency Portfolio Index – Excess Return.

That index provides investors with exposure to the greenback against major foreign currencies, including the euro, Japanese yen, British pound, Canadian dollar, Swedish krona, and Swiss franc. One of the primary reasons to consider UUP and the dollar today is that other traditional hedges are becoming increasingly correlated with equities, defeating the purpose of owning hedges in the first place.

“As most markets continue to grind higher, it is increasingly difficult to find assets moving in the other direction. Since the start of the year, U.S. Treasuries are increasingly co-moving with equities,” according to BlackRock. “Nor is the phenomenon limited to bonds. Gold has been trading like a growth stock, with daily movements driven by changes in real, i.e. inflation-adjusted bond yields.”

Investors looking for hedges should understand that an ideal choice isn’t closely correlated to riskier assets and should typically appreciate in value when equities decline.

“One key characteristic that distinguishes an efficient hedge is a tendency to rise when stocks are falling. In recent quarters the dollar has been doing just that. Looking at the past few years of data, weekly changes in the Dollar Index (DXY) have had a -0.54 correlation with weekly changes in the S&P 500 Index,” notes BlackRock.

One reason UUP could build on its recent gains is that, as BlackRock points out, the dollar is benefiting this year as bond market volatility increases. Looked at another way, if 10-year Treasury yields spike again or if the Federal Reserve signals tapering is coming or that it might raise interest rates sooner than expected, the dollar could rise.

Conversely, equities have struggled recently against the backdrop of bond market turbulence, indicating that the dollar is in fact living up to its billing as an effective hedge.

“Fiscal policy is increasingly debt financed, with the highest buildup in government debt since the second world war. That said, in the near term the dollar is likely to be driven by more prosaic concerns, notably rate markets and fund flows,” concludes BlackRock.