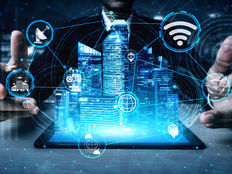 This Internet ETF Could Be a 2022 Winner

Owing in large part to exposure to some Chinese internet stocks, which were punished last year by a widespread regulatory crackdown, the Invesco NASDAW Internet ETF (PNQI C+) languished through a rough year.

However, PNQI could be a 2022 bounce-back candidate, as analysts are bullish on an assortment of the exchange traded fund’s domestic holdings. Predictably, PNQI is a growth-heavy fund, and that could serve investors well in 2022 if economic growth slows, prompting investors to flock to companies that are rapidly expanding their top and bottom lines.

“Given our belief that successful product development creates new market opportunities, strengthens value propositions and boosts revenue growth, we focus on what we see as the key products/services that these companies need to focus on in ’22 to maximize shareholder value,” said Evercore ISI’s internet stock analyst Mark Mahaney in a recent note to clients.

Mahaney, one of Wall Street’s most highly regarded internet analysts, is bullish on Amazon (NASDAQ:AMZN). The largest e-commerce company was a relative laggard in 2021, but the analyst believes that the stock can bounce back this year, and that would be a plus for PNQI investors because the stock is the ETF’s third-largest holding at a weight of about 8%.

“One of the stocks Mahaney favors among large-cap names, or companies with a market cap between $20 billion and $100 billion, is Roku. He said that while supply chain pressures will likely persist during the first half of 2022, these headwinds are already reflected in the stock,” reports Pippa Stevens for CNBC.

The $947.1 million PNQI, which tracks the Nasdaq CTA Internet Index, devotes a combined 4.11% of its weight to Uber and Roku. Mahaney is also constructive on Spotify (NYSE:SPOT) and online pet retailer Chewy (NYSE:CHWY) for the new year. That pair of stocks combined makes up nearly 2% of the PNQI roster.

Overall, PNQI holds 82 stocks, more than three-quarters of which are classified as growth stocks. The top 10 holdings combine for nearly 60% of the fund’s weight.