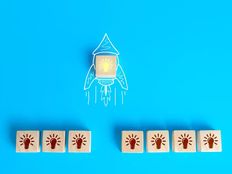 In what’s turning out to be a treacherous year for stocks, one of the obvious standouts is one that investors have been waiting to shine for a while now: value equities.

With growth stocks ranking as the primary culprits of the 2022 correction, the S&P 500 Value Index is performing significantly less poorly than the broader S&P 500. Value investors may want to evaluate the Invesco S&P 500 Pure Value ETF (RPV B+). Not only is that exchange traded fund trouncing the S&P 500 and the S&P 500 Value Index, it’s sporting a year-to-date gain — something that’s hard to come by this year.

Experienced factor-based investors know that momentum and value are two distinct concepts, but the latter has plenty of the former. That could add to the near-term case for RPV, particularly when considering the momentum accrued by value stocks through the first four months of 2022.

“The 15% gap between Value and Growth is obviously high by historical standards, and represents a dramatic reversal from recent trends. (As recently as nine months ago, the gap favored Growth by more than 10%.),” notes S&P Dow Jones Indices.

Speaking of recent momentum, RPV is beating the S&P 500 by more than 700 basis points since the start of the current quarter, confirming the potency of value investing in the current market climate.

“The acceleration of Value’s performance is nearly as impressive from this perspective. At the end of April 2022, Value was 6.5% ahead of Growth; just five months ago, for the year ending November 2021, Growth was 13.3% ahead of Value,” adds S&P Dow Jones.

Another point for investors to ponder is that the extent to which value is outperforming growth is highly unusual on a historical basis. Should that trend continue, investors may be better served with the pure value approach offered by RPV.

“Value’s 15% differential for the first four months of 2022 was not only visibly above average, it’s at the 98th percentile of all such spreads in our historical data. The only higher readings came in the deflation of the technology bubble more than 20 years ago,” concludes S&P Dow Jones. “Comparing Pure Value and Pure Growth produces much the same result.”

Further enhancing the RPV proposition is that the Invesco ETF allocates about 20% of its weight to consumer staples and energy stocks. That’s a significant overweight relative to the S&P 500 and underscores the fund’s inflation-fighting utility.