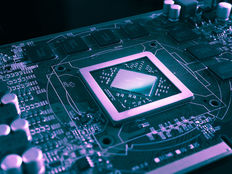 When the Chips Are Up, SOXQ Could Be Stellar

This year, the semiconductor industry is one of the epicenters of global supply chain stress, but that’s not hampering chip stocks and the related exchange traded funds.

Check out the Invesco PHLX Semiconductor ETF (SOXQ B+). Underscoring the strength in semiconductor equities this year, SOQX debuted in June — making it the newest ETF in the category at the time — and it’s needed less than six months to surge more than 22%.

Recent performance is particularly attractive, as SOXQ is higher by almost 15% over the past month. A closer examination of some of SOXQ’s marquee components reveals the sources of the rookie fund’s recent strength.

“Shares of Nvidia Corp. have gained 48% over the past month, while shares of Qualcomm Inc. have risen 40% and shares of Advanced Micro Devices Inc. have added 34%,” reports Karen Langley for the Wall Street Journal.

SOXQ tracks the widely observed PHLX Semiconductor Index, which “is designed to measure the performance of the 30 largest U.S.-listed securities of companies engaged in the semiconductor business. Semiconductors include products such as memory chips, microprocessors, integrated circuits and related equipment,” according to Invesco.

Nvidia and Qualcomm are the two largest holdings in the new ETF, while AMD is the fund’s sixth-largest component. That trio combines for nearly 24% of the SOXQ roster. Data center behemoth Nvidia, alone 10.29% of SOXQ’s weight, is contributing mightily to the fund’s upside.

“The group of stocks got another boost this past week after Nvidia reported higher-than-expected sales and earnings. Business has boomed since the pandemic drove up demand for videogames and digital services that run on data centers,” according to the Wall Street Journal.

SOXQ’s rally is rooted in fundamentals. As one example, semiconductor and chip equipment makers, which are significant portions of the fund’s lineup, are delivering earnings growth that’s exceeding the broader technology sector. Additionally, semiconductor equities are seen as beneficiaries of broader economic reopening and easing of supply chain issues.

“Semiconductor stocks also have benefited from expectations that economic growth will reaccelerate after a slowdown caused by the Delta-driven surge in Covid-19 cases and supply-chain bottlenecks,” further notes the Wall Street Journal.

Over 37% of SOXQ components are classified as growth stocks, while 10.56% are value names. The Invesco fund has $69.2 million in assets under management as of Nov. 19, making it one of the most successful industry ETFs to come to market this year.