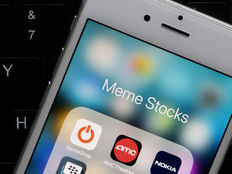 On this week’s episode of ETF Prime, host Nate Geraci is joined by ETF Trends CIO and Director of Research, Dave Nadig, who offers perspective on the meme stock phenomenon. Nadig also explains the impact of the Fed selling its bond ETF holdings and fields ETF questions from Twitter.

When discussing meme stocks such as AMC and GameStop, Nadig says the phenomenon is partially a result of new capital gained from individuals making money in the cryptocurrency space.

Nadig is convinced that there’s some irony that people aren’t really getting as far as the attraction investors have. There are certainly viable investing reasons for certain stocks, but the rise of these stocks is not arriving without a sense of self-awareness at pumping up these specific retail businesses just to make a point.

In terms of this presenting a market structure problem, Nadig points out that it’s not so much an issue as a move that’s common in any market. Pools of capital frequently arrive and disrupt the normal way to handle business. It’s really more that it’s occurring through memes and cultural influence that is making the difference in this day and age. It’s not so much a structural risk as much as it is a bit of payback in the system.

For ETF investors, Nadig feels the straightforward nature of these funds keeps things simple. Anything of note that takes place should allow an advisor to check on the portfolio to see if there’s any exposure. That said, it’s not particularly concerning, just an area to check on if interested.

Switching gears to the Fed selling their bond ETF holdings, which amount to around $8.6 billion in ETFs bought in 2020 to help stabilize the bond market, Geraci wants to know if this is coming as a surprise. For Nadig, while it is a little bit of a surprise, the important thing to keep in mind that regular investors also put in another $200 billion. It was a huge year for bond ETFs in general, which means a lot to the market structure and pricing.

While the Fed could have hung onto these holdings for another year, the fact that they are winding down all of their emergency programs is actually a good thing, as it shows they are not as necessary at this point. It was a tactical set of moves made by the Fed at the time, but it no longer makes a difference. From an ETF impact perspective, whatever happens will be minimal.