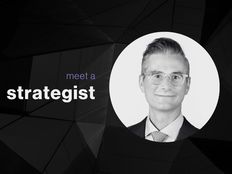 Meet a Strategist is a feature where Evan Harp talks to different strategists about how their firms are responding to the current moment. This week, he sat down with Chris Konstantinos, director of investments and chief investment strategist at Riverfront Investment Group.

Chris Konstantinos: What isn’t keeping them up at night? There’s a number of very important transitions happening right now on the global stage and in markets, and markets in transition create a lot of uncertainty and thus volatility.

The first one that I see is a transition from a world worried about the pandemic to a world increasingly worried about geopolitics. The most poignant, I think, for our investors are the Ukrainian war and then also the increasingly belligerent Cold War, Cold War 2.0, as I would call it, occurring between the United States and China. That’s transition number one.

I think transition number two, and this might arguably be the even more visceral one for markets, is a world transitioning from concerns over inflation to — and this might be looking ahead a little bit into next year — but an investor base worried today about inflation is likely going to start being more concerned in the future about recession.

Our mantra here is “process over prediction,” and what that process consists of is us calmly and rationally surveying a whole lot of data and thinking critically about it. When the weight of evidence of that data suggests that the facts on the ground are changing in some meaningful way, we will change our allocations in step with that change.

We are currently focused on stable cash flow generation for dividends and coupon.

Also, this is still a distinct change from last year, but particularly over the last few years is that we favor U.S. assets and seek to avoid international assets. We think that the macro backdrop outside the United States is worse and also that there’s more risk in foreign currency than having your investments domiciled at dollars. That’s another distinct change from where we started.

So, we’ve come down a lot in equity and have also moved lower in our international weighting as partial function of that.

In addition to being “process over prediction,” our other mantra here at Riverfront is “accountability through transparency.” We actually publish research every single week on our views of markets and how those views affect our portfolio positioning.

Evan Harp: What do you think of the markets right now?

Chris Konstantinos: I’m glad you asked because my team and I are, we’re involved in trying to publish our 2023 Outlook, which will come out midway through December. So, we’re working on this as we speak.

I’ll start with a tactical one first, because that’s always the one that people seem to ask the most about. On the tactical side, we have a whole process we built. It’s based on answering three imperatives: Don’t fight the Fed, don’t fight the trend, and beware the crowds at extremes.

On the Fed question: That’s a red flag because the Fed is actively trying to slow the economy. Therefore, to be overly bullish right now, you are quote unquote, fighting the Fed. So that’s a red flag.

Second one is “Don’t fight the trend” and we define the primary trend for markets as the slope of the 200-day moving average, which is clearly down. That’s a second red checkmark.

Then the third one, “Beware the crowd at extremes.” This one’s a little more controversial. But as we define crowd sentiment, it is neutral. It was very, very oversold, or very pessimistic, but with this recent rally, some of those indicators have become renewed.

So two red flags and a yellow tells you that our tactical view on the market is fairly cautious. Over the next three to six months, our best guess is that markets will not make much headway and may even be down.

The intermediate-term timeframe is roughly similar in that we see some potential upside in our base case, to the market over the next 12 months, but not a ton, and we think that will be coupled with a fair amount of volatility. So, call it very cautious in the near term, somewhat cautious over the intermediate term.

Over the long run, though, our views are actually more constructive. That’s because the long-term view is predicated mostly on valuation. The phrase we like to use is “price matters.” In the long run, price is the most important determinant of market returns, and the prices for stocks have come down a fair amount. They’re not cheap yet, but they’re no longer very rich. More importantly, bonds have gone from incredibly expensive to attractive, in our opinion, through the next business cycle — for probably the first time in well over a decade.

Evan Harp: Are there any ETFs or types of ETFs that you’d like to highlight?

Chris Konstantinos: There was an acronym that was widely used in the market for much of the past decade called TINA, have you ever heard this? “There Is No Alternative for growth stocks,” right? Because in a world where interest rates are really low, the discount rates on stocks were low, which meant the net present value was higher, and the further out you discounted, the more valuable they were, the higher growth they could generate, and the more valuable they were. It was a wonderful backdrop for growth stocks. We think that era is over.

We think the Fed killed it sometime around Q1 of this year, and the acronym for the new era, in our opinion, is PATTY, which is “Pay Attention To The Yield.” This is a strategy of generating consistent growing dividend coupons and cash flow yields. We’re interested in instruments, both fixed income and equity instruments, that can grow dividend payments, pay consistent coupons, and/or produce cashflow that grows enough to give those corporations flexibility with how they allocate that — whether it’s to pay it back to shareholders or to reinvest in your businesses.

Additionally, we favor pro-U.S. and generally speaking avoiding areas like Europe and China.

Chris Konstantinos: We have five cultural values here that we hold, really, really dear. But there are two that I like to emphasize, because I think they play directly into our investment philosophy. First, the value of humility dictates our tactical nature, meaning that being tactical and having a risk management discipline is inherently a humble strategy. It’s building a process around knowing that there’s a lot that you don’t know. Because if you knew everything, you wouldn’t have to be tactical, you wouldn’t have to have a risk management discipline. But our tactical and risk processes, which are the two sides of the same coin as far as I’m concerned, is inherently a humble discipline, because we know every day that we’re investing there’s something that we’re missing or something we’re getting wrong. Some thinking of ours is going to have to evolve and change, and we have a process that’s built around having that be an easy thing to implement, both operationally and culturally.

The other value that plays directly into our investments, in our communication philosophy, is accountability, which dictates we aim to be among the most transparent of money managers. Meaning, we communicate so much with our clients in real time, both in videos and in research pieces as well as in access to our website and access to the portfolio managers themselves. Financial advisors who use our portfolios and their clients have access in real time to all of our holdings, what we’re owning in real time, and the rationales behind why we’re owning those things. We think that that is an uncommon level of transparency.

Risk Discussion: All investments in securities, including the strategies discussed above, include a risk of loss of principal (invested amount) and any profits that have not been realized. Markets fluctuate substantially over time, and have experienced increased volatility in recent years due to global and domestic economic events. Performance of any investment is not guaranteed. In a rising interest rate environment, the value of fixed-income securities generally declines. Diversification does not guarantee a profit or protect against a loss. Investments in international and emerging markets securities include exposure to risks such as currency fluctuations, foreign taxes and regulations, and the potential for illiquid markets and political instability. Please see the end of this publication for more disclosures.

The comments above refer generally to financial markets and not RiverFront portfolios or any related performance. Opinions expressed are current as of the date shown and are subject to change. Past performance is not indicative of future results and diversification does not ensure a profit or protect against loss. All investments carry some level of risk, including loss of principal. An investment cannot be made directly in an index.