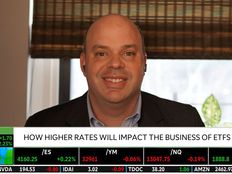 TD Ameritrade: Rosenbluth On Investors on the Defense

With markets under pressure and people opening their statements in disbelief, ETF Trends’ head of research, Todd Rosenbluth, has thoughts about the trends investors should be looking for. He went over these thoughts and more on the TD Ameritrade Network with host Nicole Petallides.

Looking at XLP, it’s been a popular fund in recent months. “Consumer staples has been leading the market in the down year that we’ve had thus far,” Rosenbluth adds, “As consumer staples has been one of the stronger sectors as consumers have been rotating toward that stability, defensiveness, and those dividend yields that you get from Coca-Cola or Pepsi or a Proctor and Gamble.”

With the pandemic, given how consumers have looked to defensive plays before by running to staples and healthcare, Rosenbluth notes how funds like XLV have been a heavy player for investors, holding up well throughout the year so far, even with the market volatility.

Rotating towards defense@ToddRosenbluth chats with @NPetallides about the ETF flows of April, picking out a few notable trends worth watching as the year continues: https://t.co/jcT056Nve5

There was that time when many from all over were excited about investing, aligning with the whole Gamestop ordeal. As far as how that looks by comparison to now, Rosenbluth explains how record inflows were a big deal in 2021, which is likely not going to be the case for 2022. That said, things are still on pace for landing somewhere between $600 and $650 billion of net inflows.

With that said, there are some notable outflows likely triggered by some significant trading days in the iShares S&P 500 ETF (IVV) and the Vanguard 500 (VOO A). There’s also really strong demand in defensive sectors and dividend ETFs such as the SPDR S&P Dividend ETF (SDY A) and the Vanguard Dividend Appreciation ETF (VIG A).

“Investors continue to lean towards ETFs during market uncertainty instead of running away from then,” Rosenbluth adds.

As for where people are when investing in energy, Rosenbluth reports that energy remains the leading sector in the S&P 500, despite being relatively small. With that said, traffic has slowed down, even while the Energy Select Sectors SPDR ETF (XLE A) continues to perform. Although investors are still less enthused by energy-related companies in recent months, which could indicate them possibly pulling that money out or there’s just enough knowledge about these funds, and they are curious about alternatives.

Again, as Rosenbluth states, “We are seeing a rotation towards those defensive consumer staples and healthcare ETFs, relative to energy or even technology for that matter.”

As far as the Fed raising rates to get to more normal levels, Rosenbluth explains how there has been rotations toward the shorter-term end of the fixed-income marketplace to try to protect portfolios. That said, the average bond fund is down, which is likely to be a concern to investors that turned to certain funds for stability.

“Investors are better off protecting their portfolios on the downside, instead of seeking out that higher yield right now and taking on that credit and interest rates.”