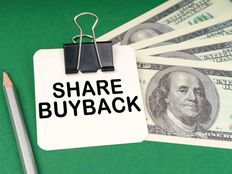 While tech giants like Apple (AAPL) and Google parent Alphabet (GOOGL) have seen their stocks go down by 27% and 39% year-to-date, both companies have used their ample free cash flow to finance their stock repurchasing programs.

Free cash flow is the cash left over after a company has paid expenses, interest, taxes, and long-term investments. It is used to pay dividends, participate in mergers and acquisitions, or buy back stocks.

These large buyback programs from some of the largest companies in the world shine a light on the importance of companies having free cash flow, and how free cash flow may be a more important metric for the strength and sustainability of a company than quarterly GAAP earnings.

Apple and Alphabet are among the holdings in the FCF US Quality ETF (TTAC C+), which aims to outperform the Russell 3000 through a fundamentals-driven investment process that selects an average of 144 stocks based on free cash flow strength. Its holdings are then weighted by a modified market-cap log transformation, allowing increased exposure to companies with the strongest proprietary free cash flow rankings.

The portfolio is rated with an ESG score, excluding companies with low ESG ratings. Firms with an extreme rise in shares count and increase in leverage are also excluded.

FCF Advisors specializes in free cash flow investment strategies, primarily through its Free Cash Flow Quality Model. They have been focused on this factor since 2011 and are specialized in multi-factor fundamental analysis grounded in decades of research.

“Free cash flow is so important right now, given that the allocation environment has gotten exponentially more difficult in 2022,” said Bob Shea, CEO and CIO of FCF Advisors. “Cohorts have never seen an environment like this. In a difficult environment, people want to make sure they understand what they own.”