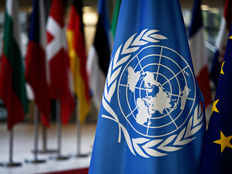 As UN Sounds Alarm on Climate Change, Check Out GSFP

Climate-focused investing is gaining more credibility and momentum. That’s a plus for exchange traded funds such as the Goldman Sachs Future Planet Equity ETF (GSFP B).

Still, investors want to know why companies that are prioritizing climate awareness and sustainability, such as those residing on the GSFP roster, are sound long-term bets. A recent report from the United Nations (UN) answers that question.

Last week, ahead of the 021 United Nations Climate Change Conference, known as COP26, slated for November, the UN released carbon reduction pledges from countries participating in the Paris Climate Accord. Even with the U.S. and an array of European nations taking the Paris Climate Accord seriously, plenty of work still needs to be done, and that’s where some GSFP components could come in.

“The problem is that even with the pledges, the world is on a ‘catastrophic pathway’ toward 2.7 degrees of heating, according to U.N. Secretary-General Antonio Guterres. He therefore urged wealthy nations, which account for 80% of global emissions, to ensure that the Paris Agreement does not fail,” according to S&P Global Market Intelligence.

GSFP is relevant on this stage because the Goldman Sachs ETF features a global roster of companies focusing on reduction of greenhouse gas emissions — a pivotal element in the effort to combat climate change. In other words, while GSFP isn’t an environmental, social, and governance (ESG) fund in the traditional sense, it’s an appropriate bet for investors looking to make a climate-focused wager.

GSFP could also be a well-timed bet because the time to reduce carbon emissions is now, and efforts need to be immediately stepped up.

Speaking of timing, the time could be right for GSFP for another reason: There’s substantial government support, particularly in developed markets, to step up the climate change fight right now with much of the effort being led by the U.S. and the European Union.

The aforementioned UN report was released “the same day President Joe Biden was holding his second virtual Leaders Summit on Climate to try to get nations to ramp up their climate commitments ahead of COP26. The conference has been described as the world’s last chance to avoid runaway climate change,” notes S&P Global.