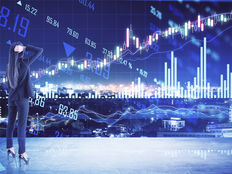 Disruptive Tech Could Still Have Gas in the Tank

Exchange traded funds focusing on disruptive technologies are mired in a now-lengthy rough patch, but some market observers believe that now isn’t the time to throw in the towel on these assets.

The argument is familiar, but relevant. Innovative companies, particularly those on the smaller side of the ledger, encounter bumps along the way, and their stocks don’t move higher in linear fashion. However, those factors don’t diminish the long-term case for a fund such as the Goldman Sachs Future Tech Leaders Equity ETF (GTEK C+).

GTEK provides exposure to multiple disruptive growth concepts through a basket of 65 stocks that have market values of less than $100 billion when added to the fund. Some of the technologies that came to the forefront at the height of the coronavirus crisis have long-term implications for GTEK and its holdings.

“When it comes to working from home, the widespread adoption of remote working is unlikely to be reversed significantly once the pandemic abates fully,” according to BNP Paribas. “The pandemic has also given rise to an uptick in automation, particularly in service industries where, initially, social distancing kept many workers away from the workplace for months and where later worries about being infected at work extended absences.”

GTEK allocates over 76% of its weight to technology stocks, but plenty of the fund’s holdings from that sector intersect with other innovative industries, including e-commerce. That’s relevant because there’s still rapid growth to be had in that industry.

GTEK’s significant exposure positions investors to benefit from other compelling, long-ranging themes, such as big data and cybersecurity, among others. Those industries have long runways for robust corporate and government spending thanks to the constantly evolving digital transformation that’s at play.

It’s also worth noting that GTEK member firms are likely to consistently sport high multiples, but that’s the cost of embracing disruptive tech, and it’s not always a strike against this investment strategy.

“However, we believe the sector deserves a premium multiple versus the broader market due to its improving returns on invested capital (ROIC) and its superior growth prospects,” concludes BNP Paribas.