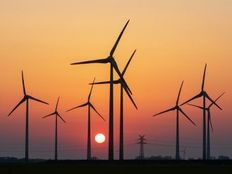 There are some stark realities emerging on the global energy stage this year, and while some may be near-term painful, arguably all cement the notion that renewable energy must be part of the equation going forward.

Assuming more governments wake up to that point and many, including those across Europe, may not have a choice, patient investors could be rewarded by a variety of green energy and clean technology exchange traded funds. That group includes the Goldman Sachs Future Planet Equity ETF (GSFP B).

Issues including improving consumer and investor sentiment toward clean energy, technological advances, and Russia’s invasion of Ukraine, among other factors, are highlighting the importance of clean energy expansion.

“These factors have only intensified the quest for long-term affordable, clean, and secure energy—what we think of as the energy transition trinity,” notes Goldman Sachs Asset Management (GSAM) portfolio manager Vikrum Vora. “Achieving this trinity is a herculean task, and it won’t happen overnight. To get there, we believe continued policy action is needed to mitigate and adapt to climate change, build support for what will be a difficult and costly transition, and incentivize significant capital in underinvested areas of clean energy value chains.”

As noted above, a primary reason GSFP could be in the spotlight going forward is Russia’s war against Ukraine. That hostile action is exposing flaws in the energy policies of many European nations, which are overly reliant on Russian crude and natural gas. That conflict is also facilitating higher energy commodities prices this year, which is having global implications. With winter just months away, the situation in Europe could worsen.

“Natural gas prices are higher due to faster demand recovery coming out of COVID-19 as well as tight gas fundamentals driven by supply outages in the global gas value chain and years of underinvestment. Europe is relatively worse off than the U.S. due to the region’s dependence on Russian gas and having less storage of gas needed for winter months.,” adds Vora.

Adding to the allure of GSFP is the actively managed ETF’s industry-level inroads to clean, which could be a benefit as clean/fossil fuels spreads narrow.

“While we believe it’s well understood that the cost of new build renewables is cheaper than new-build energy sources, what we think is less appreciated is that even with the cost inflation we’ve seen in 2022, the spread between new build renewables and existing electricity prices is wide,” concludes Vora.