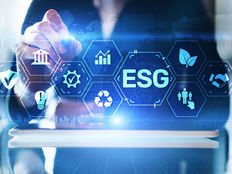 As the environmental, social, and governance (ESG) investing movement gains momentum, something else that’s gaining speed is complaints about ESG ratings and scoring.

However, some experts believe that increasing criticism of ESG strategies signals a maturing segment, and that could be beneficial for exchange traded funds like the Goldman Sachs JUST U.S. Large Cap Equity ETF (JUST).

“The mainstreaming has taken place over the past decade and a half. The mainstreaming of ESG is now prevalent enough that it has detractors. Is there anything in the investment space or capital markets that doesn’t have supporters and detractors?” says Michael Jantzi, founder of Sustainalytics.

Frequent ESG arguments revolve around the need for breadth, depth, and specifics. JUST is one of the ETFs that checks those boxes and does so in a fashion that’s unique relative to competing strategies. JUST tracks the the JUST U.S. Large Cap Diversified Index, which goes beyond simple ESG metrics. Rather, the benchmark uses 88 filters to screen the Russell 1000 on “a variety of issues, including worker treatment, customer concerns and environmental impacts,” according to Goldman Sachs.

“Different starting points lead to different outcomes, so the market has choice. That’s a good thing from my perspective. I often wonder if the critics of ESG ratings are also the ones complaining loudly about the fact that credit ratings and sell side ratings are too aligned,” adds Jantzi.

JUST, which turned three years old in June, has nearly $257 million in assets under management and holds 450 stocks. Given that deep lineup and its sector exposures that are comparable to those found in widely followed domestic benchmarks such as the S&P 500 and the Russell 1000, JUST can be used as a core holding for investors looking for ESG principles to work into their portfolios.

Moreover, JUST accomplishes the goal of differentiation in a crowded market segment. The ESG ETF industry has likely evolved to the point that end users — both pros and retail — are demanding to know what separates competing products apart. JUST answers that call with aplomb.

“Investment management firms need to differentiate themselves in an increasingly crowded market. For example, we’ve seen an array of investment managers talking about how they’ve created their own proprietary ratings systems. Now they’re out with a framework to rate companies. They don’t provide a lot of information saying how what they’re doing is different,” according to Jantzi.