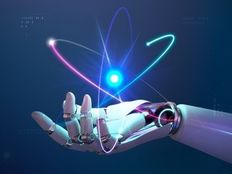 Look to Disruptors of the Future With GTEK

Disruptive growth exchange traded funds are showing signs of life. For example, the Goldman Sachs Future Tech Leaders Equity ETF (GTEK C+) is higher by 8.26% over the past month.

Impressive as that run is, investors shouldn’t let short-term thinking overpower long-term reasoning. Translation: GTEK’s recent run is undoubtedly compelling, but investing along the lines of disruptive growth really bears fruit over the long haul, confirming that patience is required with this fund.

Fortunately, GTEK is actively managed — a trait that could make it easier to stick by the fund over longer holding periods. As just one example of active management potentially benefiting GTEK shareholders, the fund primarily focuses on stocks with market values of less than $100 billion.

While that doesn’t mean that GTEK is littered with speculative micro- and small-cap fare, it does mean the average market cap of its holdings is smaller than what investors expect to find with traditional ETFs dedicated to the technology sector.

That makes GTEK’s status as an active fund all the more meaningful because picking individual names among smaller disruptive growth stocks is a taxing endeavor. Additionally, some investors may not have the resources or time to properly identify the wealth creators of tomorrow today. For risk-tolerant investors, that effort is increasingly important in the current market climate.

“Decelerating GDP growth, rising interest rates, and peaking profit margins suggest returns may be lower in the new market cycle. Looking ahead, we think the companies contributing to alpha will innovate, disrupt, enable, and adapt, and be diverse across global markets. We believe investors will need to be precise in identifying these wealth creators, especially in a world of narrow wealth creation,” according to Goldman Sachs Asset Management.

Another point in favor of GTEK is that its roster isn’t limited to domestic companies. Yes, the ETF devotes 60.3% of its weight to U.S. companies, but the other 39.7% is meaningful because North America doesn’t have a monopoly on stocks with wealth-creating potential. About 35% of such names are found in North America, but a combined 58% are found in Asia ex-Japan and Europe, according to GSAM data. Those two regions combine for 31.5% of GTEK’s geographic exposure.

“To put the past two decades in perspective, just 27% of Russell 3000 companies accounted for 140% of the market cap gain, and only 48% of S&P 500 companies outperformed US Treasury bills. Directionally, we think active management in ex-US equities and liquid alternatives can potentially navigate the new cycle skillfully,” concluded GSAM.