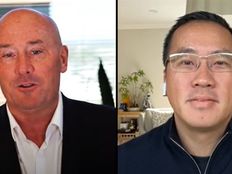 In the Thematic Investing series, Tom Lydon, CEO of ETF Trends and ETF Database, alongside experts and innovators from Goldman Sachs, sheds light on one of the most popular alternative investments, thematics, and how they can benefit advisors and investors. In the premiere episode, Lydon is joined by Sung Cho, managing director, global head of technology investing at Goldman Sachs Asset Management.

Most advisors in the last decade have kept their portfolios fairly aligned with the S&P 500, a strategy that Lydon explains has worked well for a long time. It’s an investment approach that has inherently captured much of the technological innovation happening, as Cho explains that innovation has been largely in U.S. mega-caps, companies which make up the top 50% of the S&P 500.

This trend is changing, however, as Cho explains: “If you fast forward over the next decade, we think that the most compelling returns are likely to be outside of that top mega-cap tech companies.”

GTEK Invests Broadly to Capture the Innovators of Tomorrow

Goldman Sachs believes that a better approach is investing globally and across market caps, looking beyond just the U.S. to harness the best returns. The Goldman Sachs Future Tech Leaders Equity ETF (GTEK C+) is a fund that allocates 50% of its portfolio to companies outside the U.S. and invests in a variety of market caps. GTEK excludes any company over $100 billion in market cap so that it can better capture the innovators of tomorrow, Cho explains.

“If you are only invested in mega-cap, you’re not really getting access to the next wave in innovation in certain areas that we think are going to create a dramatic amount of investor return,” Cho says.

One such area is fintech, which is still in the starting stages but has seen a greater than 10x increase in venture capital over the last four years. Cybersecurity is another area which has seen prolific growth over the course of the pandemic and a work-from-home environment, where ransomware attacks have increased seven times in the past year alone. Online entertainment is yet another area that has experienced rapid growth during the pandemic.

“The advent of 5G as a result has catalyzed the universe of AR/VR ecosystem. We think we’re starting at the early innings of a shift in how entertainment is consumed, and we see a lot of potential in some of the key technologies that will enable this transition," Cho says.

A specific segment that Goldman Sachs believes is poised to grow exponentially is smart components, including semiconductors, as industries such as electric vehicles accelerate production in 2022 and beyond.

Tech has taken a big hit in recent months, but Cho is quick to remind investors that while the sector has experienced tremendous growth in the last five years, there have also been 10 periods of double digit correction that have occurred, often driven by interest rate concerns.

“Each one of those times, it’s represented a buying opportunity to get ahead, to get your portfolio positioned for innovation,” Cho explains.