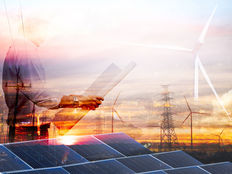 This ETF Has Energy Transition Champions

The renewable energy transition is underway, and in the eyes of many market observers, it’s going to be one of the most disruptive themes of the coming decades.

While plenty of exchange traded funds offer exposure to renewable energy and clean technology, not all are adequately positioned to take advantage of long-term trends in these spaces. The Goldman Sachs Future Planet Equity ETF (GSFP B) is an example of an ETF with strong long-term potential as a play on the renewables transition.

Bolstering the case for GSFP is the fact that renewable energy is a global phenomenon and not confined to U.S. borders. Europe is one of the leaders on this front, and that’s relevant to the GSFP investment thesis because the ETF allocates 37.2% of its weight to European equities, making Europe its second-largest geographic exposure after North America.

“We estimate a 50% increase in power consumption to 2030. By then, electricity could represent [about] 50% of total European primary energy consumption, vs [about] 20% today,” said Goldman Sachs analysts, led by Alberto Gandolfi, in a recent note.

Some European energy companies that are also GSFP member firms are leading the continent’s renewable transition and make Goldman’s list of ways to tap into that theme. That group includes Italian energy firm Enel.

“The bank expects the company to deliver earnings growth of about 20% this year and high-single-digit annual EPS growth into 2026. The company is also expected to partially rotate its exposure out of Latin America into developed economies, which the bank views as a positive move,” reports Zavier Ong for CNBC.

Goldman’s new price target on Enel implies upside of 63.4% from the February 4 close. The bank is also bullish on Spain’s Iberdrola, which “Goldman expects to deliver annual high-single-digit EPS growth into 2027. The bank is about 5% above consensus on the company’s earnings into 2024, Gandolfi said. He added that the company is accelerating capital spending in Europe and could potentially do so in the U.S. as well,” according to CNBC.

Goldman’s new price forecast on Iberdrola implies upside of 44.3% from the February 4 close. Enel and Iberdrola are GSFP’s largest and fifth-largest holdings, respectively, combining for 7.7% of the ETF’s weight.