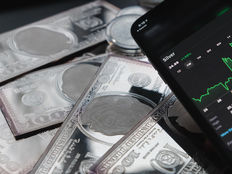 Silver and the related exchange traded funds are garnering attention amid speculation and short squeeze targeting by WallStreetBets traders.

The squeeze didn’t pan out too well on Tuesday, as silver funds tumbled, but that doesn’t mean investors should ignore the Sprott Physical Silver Trust (PSLV ), which is structured as a trust, not an exchange traded fund.

With PSLV and other silver funds, it’s important to remember that it’s harder to affect a short squeeze in a single commodity than it is with an individual stock. That could be a sign that when the WallStreetBets commotion dies down, investors will return to assessing silver on its fundamentals.

“Goldman Sachs strategists said retail investors would not be able to force a short squeeze in silver,” reports Patti Domm for CNBC. “Goldman global commodities head Jeff Currie and other strategists said a short squeeze would be “unattainable” and that regulations have made it nearly impossible for someone to corner the market. They noted that during the infamous squeeze in 1980, the Hunt brothers were able to acquire a third of the world’s supply, driving the price up by 713% in three weeks.”

The Outlook for Silver

Easy monetary policies and the weak greenback are clearly beneficial to commodities prices, particularly precious metals, but there are other reasons to believe PSLV will continue shining well this year.

Amid increased adoption of renewable energy sources, new, fast-growing end markets are emerging for silver. Translation: the expected influx of cash to the renewable energy industry thanks to Biden’s victory is seen as benefiting silver prices.

As for the short squeeze, it’s probably not happening, so investors can wait out declines in silver and get better pricing with PSLV down the road.

“Shorting a commodity is also different than shorting a stock, the Goldman strategists added. An equity short position involves borrowing shares of the company that is being shorted with the promise to return those shares to their owner at some agreed date. There is an implicit guarantee that the stock will be purchased at some point,” adds CNBC. “That is not so in the commodities market. The Goldman strategists noted that some shorts are speculative and require covering before they expire, but most are driven by hedging by industrial producers. When short positions are mostly backed by real physical commodities, there is no subsequent buying and there is no short squeeze. To create a short squeeze would require ownership of a large portion of the physical commodity market.”