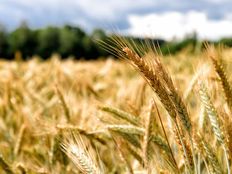 American agricultural firms with offices in Ukraine are closing their facilities there after Russia invaded the country, the Wall Street Journal is reporting. On Thursday, a spokesperson for Archer Daniels Midland Co. said that the crop trading and processing company ceased operations in its Ukraine-based facilities. ADM’s Ukraine facilities employ more than 630 people and include an oilseed crushing plant in Chornomorsk, a grain terminal in the port of Odessa, and six grain silos and a trading office in Kyiv.

Meanwhile, farm cooperative CHS Inc. has also been winding down its export activity in Ukraine for the past few weeks. Though the grain shipper and retailer of seeds and chemicals doesn’t own any port operations in the country, it employs 46 people in the region.

These agricultural giants shuttering operations in Ukraine could have huge implications for the Invesco DB Agriculture Fund (DBA A), which invests in a diversified basket of various agricultural natural resources. The fund seeks to track changes in the level of the DBIQ Diversified Agriculture Index Excess Return plus the interest income from its holdings of primarily U.S. Treasury securities and money market income.