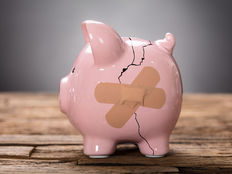 The largest U.S. banks passed the Federal Reserve Board’s annual stress test with flying colors, showing that they have enough capital to continue lending during a severe recession.

Under a hypothetical severe economic downturn, the 34 lenders with more than $100 billion in assets that were tested remained well above their minimum capital requirements, despite total projected losses of $612 billion. Under stress, the aggregate common equity capital ratio — which provides a cushion against losses — is projected to decline by 2.7 percentage points to a minimum of 9.7%, which is still more than double the minimum requirement.

The board’s stress tests help ensure that large banks can support the economy during economic downturns. The tests evaluate the resilience of large banks by estimating their capital levels, losses, revenue, and expenses under hypothetical scenarios over nine future quarters.

This year’s hypothetical scenario, which was designed to be tougher than the 2021 test, imagined a severe global recession with a nearly 40% decline in commercial real estate prices and a 55% decline in stock prices.

As a result, banks including JPMorgan Chase, Bank of America, Wells Fargo, Citigroup, Morgan Stanley, and Goldman Sachs can use their excess capital to issue dividends and buybacks to shareholders, according to a report from Reuters.

“We view this as about as positive for the big banks as one could expect from the annual stress test,” wrote Cowen Washington Research Group analyst Jaret Seiberg in a research note. “Banks didn’t just perform well. The test showed they could weather a severe downturn with plunging commercial real estate and equity values and surging unemployment levels.”

This news should benefit the Invesco KBW Bank ETF (KBWB B), which tracks the widely followed KBW Nasdaq Bank Index.

“The Index is a modified-market capitalization-weighted index of companies primarily engaged in US banking activities,” according to Invesco. “The Index is compiled, maintained and calculated by Keefe, Bruyette & Woods, Inc. and Nasdaq, Inc. and is composed of large national US money centers, regional banks and thrift institutions that are publicly traded in the US.”

“The Invesco ETF provides diversified exposure to large-cap banks that have sufficiently strong balance sheets to reward shareholders with ongoing dividends and buybacks,” said Todd Rosenbluth, head of research for VettaFi. “Given advisor concerns about a potential recession, such financial stability is likely to be rewarded.”