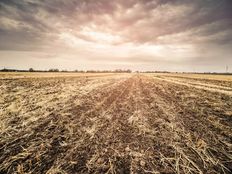 Russia’s invasion of Ukraine has threatened the world’s wheat supply and jolted prices at a time when wheat production was already facing challenges. A report from the Wall Street Journal notes that wheat stockpiles were already running low and prices were at record highs due to poor growing weather before the war in Ukraine disrupted shipments through the Black Sea. Together, Russia and Ukraine provide about 26% of the world’s wheat supply.

According to Reuters, May wheat futures traded at about $8.84 per bushel on the Chicago Board of Trade the day before Russia invaded Ukraine on February 24. On March 8, nine trading days after the invasion, the price jumped 54% to roughly $13.63.

Prices could rise even further. On Tuesday, Jim Cramer, host of CNBC’s “Mad Money,” said that Russia’s invasion of Ukraine could continue to push corn and wheat prices higher. Citing analysis from DeCarley Trading’s senior commodity market strategist Carley Garner, Cramer said, “That is the last thing we want to see, but we might have to get used to it.”

Investors who believe that commodity prices will continue to rise may want to consider the Invesco DB Agriculture Fund (DBA A), a combination of futures within several areas of agriculture, including wheat, soybeans, coffee, corn, cattle, cocoa, sugar, hogs, and cotton. It invests in a diversified basket of various agricultural natural resources and seeks to track changes in the level of the DBIQ Diversified Agriculture Index Excess Return plus the interest income from its holdings of primarily U.S. Treasury securities and money market income.