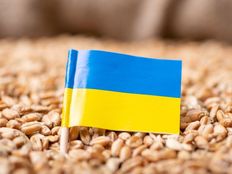 After surging to record levels at the beginning of Russia’s invasion of Ukraine, wheat trading is now at its lowest levels since February. On Friday, the most active wheat futures contract fell 5.9% to $7.59 per bushel on the Chicago Board of Trade. This decline follows Russia and Ukraine reaching a deal to resume Ukrainian grain exports via the Black Sea.

Following months of negotiations, Russia and Ukraine reached an agreement clearing the way for exporting millions of tons of Ukrainian grain, as well as guaranteeing Russian exports of its grain and fertilizers. Ukraine will attempt to return to prewar levels of shipping about five million tons of grains a month.

Ukraine is one of the world’s largest exporters of wheat, corn, and sunflower oil. Cutting off its supply had sent grain prices higher worldwide and threatened global food security.

U.S. grain traders believe the deal should alleviate worries about rising food prices. Don Roose, president of agricultural brokerage U.S. Commodities Inc., told the Wall Street Journal: “The trade is just unwinding all of the premium from the concerns around the Russia-Ukraine invasion.”

This agreement and subsequent lower trading levels are sure to have an impact on the Invesco DB Agriculture Fund (DBA A). DBA is a combination of futures within several areas of agriculture, including wheat, soybeans, coffee, corn, cattle, cocoa, sugar, hogs, and cotton. It invests in a diversified basket of various agricultural natural resources and seeks to track changes in the level of the DBIQ Diversified Agriculture Index Excess Return plus the interest income from its holdings of primarily U.S. Treasury securities and money market income.