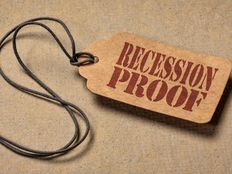 Recession-Proof a Portfolio With XHYD

Is the U.S. economy headed towards a recession? Many Wall Street analysts and industry vets seem to think it’s a very real possibility, including former Goldman Sachs CEO Lloyd Blankfein. Speaking with “Face the Nation” on CBS News Sunday, Blankfein said that there was a “very, very high risk” that the U.S. economy could be heading towards a recession as the Federal Reserve tightens policy to combat high inflation.

“If I were running a big company, I would be very prepared for it,” said Blankfein, who stepped down as CEO in 2018 but is still Goldman’s senior chair. “If I was a consumer, I’d be prepared for it. But it’s not baked in the cake.”

Blankfein attributed high inflation to the economic stimulus the government introduced to mitigate the impact from the COVID-19 pandemic, supply chain issues, lockdowns in China, and the war in Ukraine.

“The Fed has very powerful tools. It’s hard to finely tune them and it’s hard to see the effects of them quickly enough to alter it,” Blankfein added. “But I think they’re responding well.”

With an economic slowdown a real possibility, institutional fixed income investors with a long-term view may want to move away from broad-based exposure and consider some defensive sectors. One option to protect against a possible recession may be the BondBloxx US High Yield Consumer Non-Cyclicals Sector ETF (XHYD ).

“We are hearing two things from clients right now. First, they are thinking about putting risk back on in their fixed income portfolios. Second, they are concerned about a higher probability of a recession. Because XHYD offers precise exposure to non-cyclical high yield industries, it is a choice for investors who are looking for defensive positioning as we go into the second half of the year,” said JoAnne Bianco, client portfolio manager at BondBloxx.

XHYD is one of seven new U.S. high yield bond ETFs that BondBloxx Investment Management launched in February. The funds offer precise, index-based exposure to the high yield asset class and allow investors the opportunity to diversify and manage risk to the industry sector.

The funds are passively managed and track rules-based sub-indexes of the ICE BofA US Cash Pay High Yield Constrained Index.