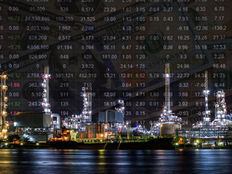 After rallying to over $62 a barrel 10 days ago, WTI crude oil prices slumped even more mid-week as Saudi Arabia claimed it is ahead of schedule to make the required repairs to the Abqaiq facility. The easing of concerns surrounding the world’s largest oil supply outage allowed traders to shift their sights back to the deteriorating economy, driving oil prices lower.

“Market participants are no longer focusing on the risks to supply now that Saudi Arabia has raised the prospect of its oil production being rapidly restored,” Commerzbank said in a note on Wednesday. “Instead, concerns about demand have gained the upper hand again.”

President Trump also attempted to stymie a rise in oil prices further this week, speaking to the UN General Assembly on Tuesday, where he ripped into China over its trade practices, tempering plans for an end to the trade war when the two countries resume negotiations next month.
The president also had some biting remarks about Iran, but did interestingly leave small window open for a path to de-escalation. “America knows that while anyone can make war, only the most courageous can choose peace,” Trump said.

Sophisticated investors seeking to capture the downside of the oil market and willing to take on some risk can look into the following 3 ETFs, which have been performing well recently:

The ProShares UltraShort Bloomberg Crude Oil (SCO A+) is up 2.33% Thursday. This ETF offers 2x daily short leverage to the broad based Dow Jones-UBS Crude Oil Sub-Index, making it a powerful tool for investors with a bearish short-term outlook for crude oil. Investors should note that SCO’s leverage resets on a daily basis, which results in compounding of returns when held for multiple periods. SCO can be a powerful tool for sophisticated investors, but should be avoided by those with a low risk tolerance or a buy-and-hold strategy.

The DB Crude Oil Double Short ETN (DTO A) is up 2.39% Thursday. This ETF offers 2x daily short leverage to the broad based Deutsche Bank Liquid Commodity Index-Oil, making it a powerful tool for investors with a bearish short-term outlook for crude oil futures and Treasury bills. Investors should note that DTO’s leverage resets on a daily basis, which results in compounding of returns when held for multiple periods. DTO can be a powerful tool for sophisticated investors, but should be avoided by those with a low risk tolerance or a buy-and-hold strategy.

The ProShares Daily 3x Inverse Crude ETN (WTID) is up 2.79% Thursday. WTID is intended as a trading tool, not a buy-and-hold investment. The note provides -3x exposure to its index for a one-day period. The daily reset function means investors holding WTID for longer periods are exposed to the effects of compounding, and could see returns that vary greatly from -3x exposure. WTID’s Bloomberg index tracks oil futures contracts that are rolled every other month, striking a balance between spot-price sensitivity, turnover, and contango effects. As an ETN, WTID is backed by the credit of UBS, rather than futures and cash as in a commodity pool structure. Also, investors get a 1099 at tax time instead of a K-1.