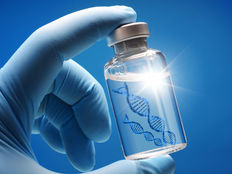 Direxion has announced today in a press release the launch of their newest ETF that focuses on the applications and developments of messenger RNA technology, the Direxion mRNA ETF.

The fund looks to capture the growth within the mRNA field by investing in companies that are working to develop and apply mRNA technology. mRNA is a molecule that is largely responsible for protein synthesis in the body and is complementary to strands within DNA. By working to alter mRNA, technologies are able to target specific diseases, helping build the body’s immune response to them.

The technology has most recently been used to create both the Pfizer BioNTech as well as the Moderna COVID vaccines.

“For years, messenger RNA (mRNA) technologies struggled to gain acceptance. The COVID-19 pandemic changed all of that, thanks to the highly effective vaccines developed using mRNA to combat the novel coronavirus and its emerging variants,” said David Mazza, managing director, head of product, Direxion, in the press release.

MSGR seeks to track the BITA Messenger RNA Technology Index, an index that tracks companies in the U.S., Canada, and Europe leading mRNA technology development and application. Mazza explained in a note the importance of a global exposure for the fund: “ETFs focused on nascent and narrow areas of the market can benefit from taking a global approach to identifying companies for inclusion. For example, if MSGR only included companies domiciled in the US, it would miss out on exposure to BioNTech, one of the most important companies involved with mRNA.”

Many of the companies contained within MSGR aren’t found in any other ETFs. The following is a snapshot of the top 10 holdings for the fund at launch.

“MSGR captures companies specifically involved with mRNA technologies that are believed to be at the forefront of fighting the battle against COVID, while also highlighting mRNA’s application to other viruses and diseases, including HIV and Lyme disease,” said Mazza.