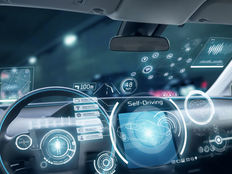 “The path to long-term acceptance and widespread adoption of electric and autonomous vehicles is brighter than ever before,” said Direxion managing director and head of product Dave Mazza in a news release. “EVAV allows traders to take an amplified bullish position on electric and autonomous vehicles, along with the infrastructure to support them.”

Those growth projections came before Senators Joe Manchin (D-W.Va.) and Chuck Schumer (D-N.Y.) introduced a $369 billion climate and tax proposal in the Senate in late July 2022. The Senate bill, called the Inflation Reduction Act, is expected to significantly affect the number of Americans driving next generation automobiles by improving U.S. energy production and storage, supply chain, and manufacturing capabilities.

“With the Senate passage of the Inflation Reduction Act, the market is looking at the electric and autonomous vehicle sector with fresh eyes given the prospect of long-term government support,” added Direxion managing director and head of sales and alternatives Edward Egilinsky. “These stocks can be volatile in nature, and thus EVAV may be a utilized as a trading tool for those active traders looking to take advantage of short-term price swings.”

Earlier this week, Direxion launched the first four of its single-stock leveraged and inverse ETFs that allow sophisticated traders to obtain magnified or inverse exposure to the daily performance of the common stocks of Apple and Tesla.

“This environment is one that’s ripe for short-term tactical trading opportunities,” Mazza told VettaFi in a phone interview. “And we’re likely to be in an environment where, because of the Federal Reserve’s plans to increase interest rates, we see heightened volatility for some time, so there are opportunities for traders to be more tactical with their portfolios.”

All Direxion leveraged and inverse ETFs are intended only for investors with an in-depth understanding of the risks associated with seeking leveraged investment results, and who plan to actively monitor and manage their positions. There is no guarantee these ETFs will meet their objectives.