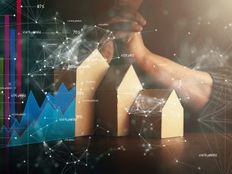 The consumer price index for June is set to release tomorrow and is likely to have a marked impact on uncertain markets that so far has driven by new data releases and major news. Amid the volatility is the realization that one part of CPI is likely to remain high for the remainder of the year, creating a constant source of inflationary pressure while the Fed fights hard to drive to bring inflation back in line.

The cost of housing has continued to climb at a rapid pace. May’s housing, measured within CPI, was at 5.4%, soaring high above the average of 3.5% and a significant increase from its 1.4% low at the beginning of 2021, reported the WSJ.

Housing is an important component in calculating CPI as it makes up about two-fifths of the core CPI (inflation without energy or food costs) and accounts for roughly one-sixth of the gauge that the Fed uses to measure inflation and set its policy. The cost of houses isn’t calculated directly because they fall under investments, not consumer goods. Instead, housing prices are captured in the monthly prices of rent in existing rental homes as well as the estimated cost that a homeowner would pay if they were renting their home.

Rent inflation generally lags between six to nine months and has the potential to continue increasing over the summer months before peaking around a 36-year high of 6.5% according to David Wilcox, senior economist at Bloomberg Economics and the Peterson Institute for International Economics and former economist for the Fed.

It means that for inflation, “that slowdown is going to have to emanate from other sectors of the consumer marketplace,” explained Wilcox.

Higher housing prices could contribute as much as 1.1% to CPI this year and in 2023, according to economists at the Federal Reserve Bank of San Francisco. Mortgage rates are at a 14-year high with a sharp fall in demand for home ownership, but this is expected to have little to no bearing on the continued demand for rent which could see rental prices remaining high.

Investing for Volatility With DBMF

No matter how you slice it, inflation looks to be an increasingly persistent nut to crack and continued aggressive rate hikes could prolong volatility and market declines. Investors looking for a fund that has performed well during volatility should consider the iMGP DBi Managed Futures Strategy ETF (DBMF B+). The year-to-date return for the fund is currently 26.62% according to the DBMF website.