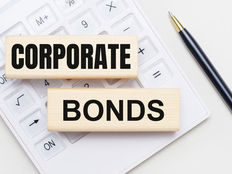 As Supply Surges, It's Time to Be Choosy with Corporate Bonds

Data confirm corporate borrowers are again taking advantage of favorable interest rates to issue new debt. That could be a sign that investors may want to apply more scrutiny to exchange traded funds providing exposure to corporate bonds.

One way of accomplishing that objective is with the WisdomTree U.S. Corporate Bond Fund (WFIG C+). WFIG, which turned five years old in April, sets itself apart from traditional rivals in this category by focusing on fundamentals.

WFIG follows the fundamentally weighted WisdomTree U.S. Corporate Bond Index. That benchmark “employs a multi-step process, which screens on fundamentals to identify bonds with favorable characteristics and then tilts to those which offer attractive income characteristics,” according to WisdomTree.

WFIG’s focus on fundamentals can bring investors a higher-quality approach to corporate bonds, which is paramount because credit risk is one of the biggest concerns in this asset class. That’s something to consider as a spate of new issuance hits the market.

“26 borrowers raised transactions in the US market on 9 August, with the rush of supply – which we calculate to have exceeded USD17 billion – being attributed to further signs of economic strength contained in the latest US employment release,” according to IHS Markit. “Among larger issuers were Thermo Fisher with USD3.1 billion of seven, 10, and 20-year debt, with coupons of 1.75%, 2%, and 2.8%, helping to fund its acquisition of PPD, Inc., and BMW US Capital with USD2.5 billion in four tranches spanning three to 10 years.”

WFIG covers that base as roughly half the fund’s holdings are rated AAA, AA, or A.

Although it emphasizes fundamentals and quality, WFIG’s income proposition doesn’t suffer as a result. The WidsomTree ETF yields 2.40%, which is mostly in line with the yield on the widely followed Markit iBoxx USD Liquid Investment Grade Index.

Additionally, the strong U.S economy is supporting the flood of new corporate bonds coming to market, further underscoring the benefits of WFIG’s more tailored approach to this asset class.

“IHS Markit Economics also noted that ‘Average hourly earnings (AHE) rose 0.4% in July and are up 4.0% from July 2020. Over the last three months, AHE have risen at a 5.0% annual rate’, with those in leisure and hospitality ‘surging 16.6% (annual rate) over the last three months.’ While bond issuers appear to have interpreted the data as pointing to early Federal Reserve tapering of their asset purchases, we highlight that that data is ‘just prior to the Delta variant outbreak,’ and thus less clear,” according to the research firm.