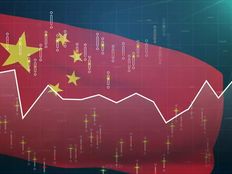 For over a year now, the narrative on Chinese equities has largely been gloomy, as highlighted by the MSCI China Index shedding a third of its value over the past 12 months.

Much of that has to do with Beijing enforcing a regulatory crackdown aimed at many of the Chinese companies that global investors previously found most alluring. Add that into ongoing tensions with the U.S., which are prompting speculation about domestic equity exchanges potentially delisting Chinese stocks, and it’s clear that there’s risk in this asset class.

Of course, if Beijing can take away, it can also give. At the very least, leaders in the world’s second-largest economy are attempting to alter the narrative surrounding Chinese stocks, and that could be beneficial to exchange traded funds such as the WisdomTree China ex-State-Owned Enterprises Fund (CXSE A-).

The $820 million CXSE is a prime example of a U.S.-listed China ETF that could benefit from more clarity and assistance out of Beijing, including efforts to work with the PCAOB (Public Company Accounting Oversight Board) to meet mandates set forth by the HFCAA (Holding Foreign Companies Accountable Act).

“We believe this risk could be managed, since more than 90% of the WisdomTree ex-State-Owned China Index already trading Hong Kong or Chinese domestic shares, not U.S. shares, as many large-mid companies have a dual share listing, and liquidity in Hong Kong has significantly improved,” adds Ren.

Against the backdrop of Russia’s war with Ukraine — which China hasn’t openly condemned — the vital factor in assessing CXSE and comparable strategies is earnings power.

“We believe the Russian war and earnings are the top factors to pay attention to for China equity. Can Chinese companies continue making money in the face of all these risks?” concludes Ren.