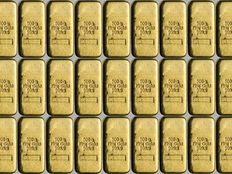 In the face of rising interest rates and a strong U.S. dollar, gold returns are decent though far from spectacular in 2022. For example, the largest gold-backed exchange traded fund is higher by 1.11% year-to-date as of May 30 — a far better showing than those offered by broader equity and fixed income benchmarks.

Modest as that performance is, it could still be a sign that gold retains its hedging properties and that ETFs such as the WisdomTree Efficient Gold Plus Gold Miners Strategy Fund (GDMN) should not be ignored.

The yellow metal has long been viewed as a hedge against inflation and equity market volatility — two scenarios that are present this year. Still, investors considering a fund such as GDMN need to evaluate exactly what they’re using gold to hedge against.

“Gold has staged impressive rallies on days when oil spiked, defined here as a daily gain of more than 3%. On these days gold’s average gain has been around 1.3%. On all other days, gold returns have been close to flat,” according to BlackRock research. “The tendency for gold to trade with oil could be interpreted as simply an intuitive relationship with other commodities.”

In addition to being a hedge against soaring consumer prices and turbulent market settings, gold is historically a hedge against geopolitical conflict, indicating that GDMN is relevant today owing to Russia’s now multi-month war against neighboring Ukraine.

Still, GDMN and its peers would likely benefit from the Federal Reserve pausing its rate-hiking plans or raising rates by less than expected.

“Consistent with history, during the past two years weekly changes in gold prices have had a -0.4 correlation with changes in real 10-year Treasury yields, i.e., interest rates net of inflation expectations. In other words, gold tends to fall as real rates rise. This dynamic has been on display during the past few months. Since 10-year real yields bottomed in March, they have risen by 1.50%, an unusually large and rapid move,” added BlackRock.

Specific to GDMN, the WisdomTree fund is unique in the gold ETF arena. It’s actively managed and features exposure to both gold futures contracts and shares of gold miners. The structure could be a positive for investors in the back half of 2022.

“To the extent volatility is mostly a function of central bank tightening, gold may continue to struggle as monetary conditions normalize. However, if attention re-focuses on the war in Europe and all the impossible to quantify outcomes, gold will probably hold up relatively well amidst the chaos,” concluded BlackRock.