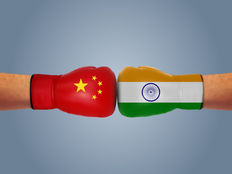 China is usually the largest country weight (and by a wide margin) in broad-based emerging markets indexes. Yet that tide could be turning of late as Beijing cracks down on once high-flying internet and tech companies.

While that’s happening, the *WisdomTree India Earnings ETF (EPI B+)* is quietly higher by almost 20% year-to-date. In new research highlighting an array of diversified emerging markets exchange traded funds and single-country funds, Bank of America (BofA) upgraded EPI to a rating of “1” or “most attractive.” The research firm is near-term bearish on China, but is constructive on India.

“While we are bearish on Chinese equities for US investors, we are bullish on EM broadly and on India in particular,” said analysts Pooja Saksena and Jared Woodward in a note. “For the long term, these economies benefit from favorable demographics, modernization potential, and generally attractive valuations. For the short term, they benefit from a trade rebound, a weaker USD, and easy global monetary policy.”

As noted above, EPI is higher by almost 20% this year while the MSCI Emerging Markets Index is up just 1.26% and the MSCI China Index is down 10.15%. Adding to the case for EPI is, as Bank of America notes, emerging markets outside of China have beaten Chinese stocks over the past two decades, and have done so with less volatility.

Specific to EPI, India, Asia’s third-largest economy behind China and Japan, has some of the most favorable demographic trends in the world.

“India has a clear demographic advantage over many other developed and emerging economies. Its working age population is growing and has a lower age dependency ratio, where for each retiree there is more than 1 working age individual – an increasingly rare combination,” said the Bank of America analysts.

Another point that may resonate with investors is the increasing vibrancy of India’s consumer market. After all, that was a point that compelled so many investors to embrace China in recent years, but now, many consumer cyclical companies are enduring the wrath of Beijing. EPI allocates about 10% of its weight to the two consumer sectors.

“Our Strategists expect India to become a mass consumer market by 2028, where prices of entry-level cars will be 1x per capita income, down from 2.45x now and 14x in 2000. India’s GDP is growing, and so is its local consumption as a % of GDP, with no signs of slowing,” added the BofA analysts.

As the bank notes, India is now a capital expenditures-rich environment, with BofA forecasting $356 billion in spending coming down the pike, which should benefit companies in the industrial and technology sectors, among others. Those are two of EPI’s largest sector weights.