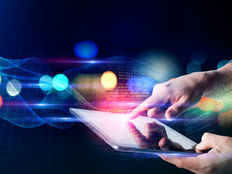 Patience Will Be a Virtue With Cloud Stocks and ETFs

Barely more than a month into 2022, and investors already know that technology is a source of weakness. Specifically, it’s high-growth, richly valued, and, in some cases, unprofitable companies that are dragging on the sector.

One bad month doesn’t mean that this situation will linger over the course of the year, and there are some benefits to the recent malaise among tech stocks. Those perks include the market making it clear that profitability should be prioritized and some companies with megatrends status offering more reasonable valuations.

For patient investors, cloud computing equities and exchange traded funds, such as the WisdomTree Cloud Computing Fund (WCLD B-), check the aforementioned boxes. Of course, scrutiny is warranted, and WCLD makes that easier by focusing on companies that are growing sales at enviable rates. WCLD’s methodology is important to investors because while many cloud computing companies fit the bill as fast-growing, there isn’t growth uniformity across the industry.

“Now, it would be incorrect to assume that all cloud-oriented players are the same—it’s certainly not a monolithic megatrend,” says Christopher Gannatti, WisdomTree global head of research. “Many have looked at Zoom Video Communications, which was the quintessential work-from-home service and has been transitioning from reporting revenue growth of roughly 350% year-over-year during its quarterly earnings calls in 2020 to something more reasonable, maybe 30%–40%, more recently.”

Adding to the allure of WCLD is the fact that the ETF isn’t dependent on the largest cloud players, such as Amazon (NASDAQ:AMZN), Microsoft (NASDAQ:MSFT), and Alphabet (NASDAQ:GOOG). In fact, that trio isn’t even represented in the fund.

Rather, many WCLD components are considered “emerging” cloud companies, which could make them appealing takeover targets. That’s something to consider because analysts expect that cloud computing will be a hotbed of consolidation activity this year. That trend is already emerging with the news that Citrix Systems (NASDAQ:CTXS) is being taken private at a price tag of $13 billion.

As Gannatti points out, Alphabet (Google) is an example of a mega-cap company that could be shopping for cloud acquisitions this year in an effort to gain more market share and better compete with rivals Amazon and Microsoft.

“In its most recent quarter, Google Cloud grew at 45% year-over-year in terms of revenue, but this got it to a level of $4.99 billion,” Gannatti notes. “However, Alphabet overall has a very large cash store: $142 billion. During 2021, deals were announced where Google took a stake in CME Group and Univision, and then these companies made commitments to use Google Cloud—in certain cases an arrangement like that could be worth more than $1 billion in revenue to Google.”