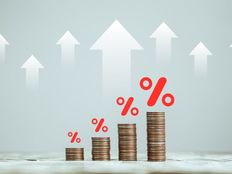 Interest rates currently sit at a target range between 2.25%-2.50% after the latest 75 basis point rate high by the Federal Reserve this week. The increase comes in response to June’s unexpected 9.1% CPI as the Fed remains committed to its fight against inflation.

The Fed Funds target is now at the peak range of the last rate increasing cycle in 2018 but it has happened at an astronomically faster pace. The previous rate cycle of 2018 took three years to get to this point, whereas the current cycle has happened in just four months, explained Kevin Flanagan, head of fixed income strategy at WisdomTree, in a recent blog post.

“If my eyes don’t deceive me, in modern monetary policy history, the Fed has never hiked rates by back-to-back 75-bp increments, which has led to an incredible total of 225 bps’ worth of rate increases in just four months’ time,” Flanagan explained.

“Think about it for a minute… As recently as March 15 of this year, Fed Funds were still at ‘zero’! Yes, we’ve blogged before about the Fed ‘front-loading’ its rate hikes, but this takes it to another level,” emphasized Flanagan.

Something else going on relatively quietly in the background, for now, is the Fed’s balance sheet reductions as it practices quantitative tightening alongside rate hikes. According to Flanagan, as of 07/27/22, the Fed’s combined holdings of Treasuries, mortgage-backed securities (MBS), and agency securities had been reduced by just $17.6 billion since reductions began in June. The reductions in Treasuries ($36 billion) were offset by the gains in MBS to the tune of $19 billion.

“In other words, QT has not yet really begun in any visible fashion. According to the Fed’s own ‘Plan for Reducing the Size of the Federal Reserve’s Balance Sheet,’ the pace of QT is expected to pick up speed and reach maximum monthly drawdown levels beginning in September,” explained Flanagan.

Today’s GDP report of a 0.9% annualized contraction shows the impact that the front-loaded, aggressive hikes are having. Bond market volatility has been pronounced this year, and with rate hikes anticipated at the three remaining Fed meetings this year, the only uncertainty is how much each increase will be.

“Powell & Co. are just about as data dependent as I’ve ever seen in their decision-making process on that front,” wrote Flanagan.

In the current rising rate environment the 10-year Treasury yield has been whipsawing, reflecting the volatility within bonds, and the continued uncertainty around upcoming rate hikes later this year as well as how inflation and the economy will trend “should keep the ‘volatility quotient’ elevated accordingly,” Flanagan predicted.