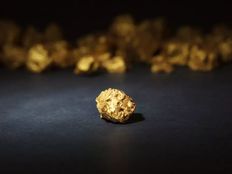 As Russia continues its armed assault on Ukraine, dragging global equity markets lower in the process, gold is doing its job for investors. For example, the yellow metal is flirting with record highs, and the largest gold-backed exchange traded fund is up 4.5% over the past week.

That rally is providing fuel for miners, as the NYSE Arca Gold Miners Index is up almost 20% year-to-date. Obviously, a run like that puts a spotlight on miners ETFs, including the WisdomTree Efficient Gold Plus Gold Miners Strategy Fund (GDMN ).

“Some investors cannot hold commodity exposure directly, so are using commodity stocks as proxies. Gold mining stocks are popular and there are a few ETFs that provide exposure to this niche sector. The total assets under management of these ETFs are close to $20 billion and the average management fee is 0.52%,” notes Nicolas Rabener of Factor Research.

In his note, Rabener brings up an important point that some investors aren’t yet aware of: Gold miners aren’t as highly correlated to spot gold prices as they might believe.

“However, the correlation of gold mining stocks to the gold price is only 0.75, which reflects the exposure to the general stock market as well as idiosyncratic risk. A gold mining company based in South Africa is influenced by the gold price, but also by local strikes, political turmoil, or a collapse of a single mine. Many of the companies have also entered long-term hedging contracts on gold to decrease the revenue volatility,” adds Rabener.

In other words, some miners ETFs could disappoint investors at times of gold market upside. GDMN has an avenue for mitigating some of that potential disappointment. The new WisdomTree ETF features some exposure to gold futures in addition to its holdings in mining equities.

Traditional gold miners ETFs don’t feature that trait, indicating that GDMN, despite being new on the gold ETF scene, could be the superior avenue for investors looking for miners exposure. GDMN charges 0.45% per year, or $45 on a $10,000 investment. That’s below the category average. The fund holds more than 50 mining stocks.