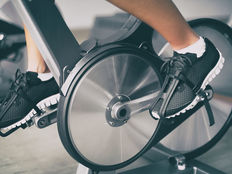 The co-founder and CEO of Peloton, John Foley, is stepping down and will be replaced by former Netflix and Spotify chief financial officer Barry McCarthy, Financial Times reports. It’s a move that brings with it the loss of 2,800 jobs for the fitness bike manufacturer, as well as a major board restructuring that could pave the way for a buyout by companies such as Amazon, Apple, or Nike.

The company had a valuation of $7.7 billion when it went public in September 2019, hitting a market cap of almost $50 billion by the end of 2020. Supply chain issues, reduced demand, and the reputational impact of a child’s death that prompted a recall of its treadmills have left the company floundering.

In a bid to bump production, Peloton broke ground on a new plant in August; that is now being phased out in a move that will cost $130 million in cash charges and $80 million in non-cash charges to reverse. The company has announced job cuts to the tune of 2,800 positions, a 20% reduction in corporate positions, and William Lynch, president and long-time supporter of Foley, stepping back to be a non-executive director.

Foley will become an executive chair while retaining his super-voting stock which allows him and other executives control of the company through veto power, and has been a major hurdle in any deals to buy Peloton previously.

Blackwells Capital, an activist investor with a 5% stake in the company, has demanded a removal of all directors from its board alongside an investigation into potential misconduct in a 65-page presentation it gave to the company’s board. It has accused Peloton of poor governance practices with insiders selling stock to the tune of more than $700 million since the IPO, and believes that the current shake-up isn’t enough.

“Mr Foley has proven he is not suited to lead Peloton, whether as CEO or executive chair, and he should not be hand-picking directors, as he appears to have done today,” said Jason Aintabi, CIO of Blackwells.

EZM Invests in Over 500 Mid-Cap Companies, but Not Peloton

The index is earnings-weighted on an annual basis so that it reflects the share of the aggregate earnings each company produced. Sectors are capped at a 25% representation in the index but can fluctuate above depending on market conditions or volume factor adjustments. Sectors included in the index are consumer discretionary, energy, consumer staples, financials, healthcare, information technology, industrials, materials, real estate, utilities, and telecommunication services.

The fund currently has 581 holdings but does not have any allocation to Peloton. Top sector allocations include financials at 21.29%, consumer discretionary at 17.76%, industrials at 13.68%, information technology at 12.51%, and more.