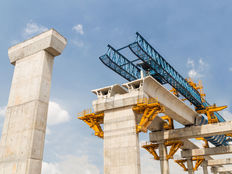 Backed by Biden, More Infrastructure Will Help This ETF

The Biden Administration has ambitious infrastructure plans, and that could put funds such as the FlexShares STOXX Global Broad Infrastructure Index Fund (NFRA B+) back in focus for investors.

NFRA tries to reflect the performance of the STOXX Global Broad Infrastructure Index, which identifies equities that derive the majority of revenue from infrastructure business, providing exposure to both traditional and non-traditional infrastructure sectors.

The near-term case for NFRA boils down to the notion that with the $1.9 trillion coronavirus stimulus package in the books, the Biden Administration will turn its attention to shoring up ailing U.S. infrastructure.

“As President Joe Biden’s infrastructure plans grow, so too does the potential upside for a handful of materials, construction and machinery stocks, according to Goldman Sachs analysis,” reports Thomas Franck for CNBC. “While the brokerage said last week that its infrastructure basket has already made sizable returns since it became clear Democrats would hold majorities in both congressional chambers, Goldman’s calculations were based on the White House floating a plan worth $2 trillion.”

NFRA’s index focuses on long-lived assets in industries with very high barriers to entry, with at least 50% of their revenue from key sectors with a 3-month average daily trending volume of at least $1 million. The portfolio is weighted based on a free-float market cap with certain constraints to limit exposure in any one security, sub-sector, or country. The fund is rebalanced annually.

“Our economists believe that parts of the infrastructure plan may be passed with bipartisan support, but that the majority of the package will eventually pass through reconciliation and rely only on Democratic votes,” said Goldman Sachs Chief Economist David Kostin.