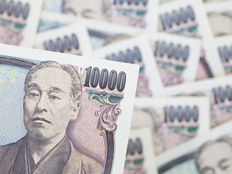 Japanese stocks are among the best-performing developed markets fare, a theme dating back to last year. Investors can join in the fun with the FlexShares Developed Markets ex-US Quality Low Volatility Index Fund (QLVD ).

QLVD’s quality screen analyzes a broad universe of equities based on key indicators such as profitability, management efficiency, and cash flow, and then excludes the bottom 20% of stocks with the lowest quality score. The index is then subject to the regional, sector, and risk-factor constraints in order to manage unintended style factor exposures, significant sector concentration, and high turnover.

Finally, Japanese stocks are shaking out of a lengthy slumber, one caused in part by unfavorable currency conversions against the U.S. dollar.

“Despite the powerful gains in the Nikkei from the 2009 bottom until recently, it has been an unprofitable investment for U.S. investors. Why? Because when the Nikkei is adjusted back into U.S. dollars, it has vastly underperformed every U.S. stock-market index. That’s because the dollar has appreciated while the yen has declined in value. From the Nikkei’s February 2009 bottom until last July, a U.S. investor would have underperformed the S&P 500 by a whopping 30%,” writes Andrew Addison for Barron’s.

QLVD: An Indirect Play on Japan

As its name implies, QLVD is a diversified fund, not a dedicated Japan product. But combine geographic diversification with more-than-adequate Japanese exposure, and QLVD begins to look extremely positive for Japanese bulls.

“Except for a brief period from 2003 to 2006, the Nikkei has been in a long and painful bear market for U.S. investors since 1989,” according to Barron’s. “But that is changing. The Nikkei/SPX ratio completed a 20-year double bottom and is hurdling an 11-year downtrend. Combining the messages from the two charts, the Land of the Rising Sun is beginning to shine for U.S. investors.”

QLVD has other Japan-related tailwinds.

“Many domestic investors are impressed by the Nikkei hitting 30,000. Indeed, the ‘equity culture’ is solidifying here. For ages in Japan, equities were considered too risky and a dishonorable way to invest, but now such are much more respectable,” said John Vail, chief global strategist at Nikko Asset Management. “Memories of the 1980s bubble and the high valuations that persisted through much of the 1990s are fading, with the realization that the past decade represents the true character of the stock market, driven by reasonable valuations, improved profits and shareholder returns via surges in dividends and buybacks.”