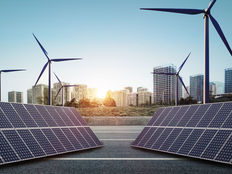 As the idea of sustainable investing takes hold, many advisors and investors are looking to ETFs that emphasize low carbon footprints. The iShares MSCI ACWI Low Carbon Target ETF (CRBN A-) is one of those funds.

The sustainable investments are not just a gimmick. A 2015 report by Morgan Stanley found that “investing in sustainability has usually met, and often exceeded, the performance of comparable traditional investments. This is on both an absolute and a risk-adjusted basis, across asset classes and over time.”

“Extreme weather events from wildfire to floods are forcing governments and companies around the world to consider climate-related risks as they plan for the future,” said BlackRock in a recent note. “Reducing greenhouse gas (GhG) emissions has been central to these plans and is already underway. According to the Global Carbon Project, the U.S. has seen GhG decline by 0.8% annually from 2013 to 2018, as it turns away from coal power to natural gas and renewable energy sources. This mirrors the downward trend in Europe, with numbers in both regions estimated to jump lower in 2019 as well.”

ETFs and other strategies that revolve around Economic, Social, and Governance, or ESG, principles have been quickly gaining traction as investors and advisors incorporate the qualitative benefits of ESG investments into their portfolios.

When it comes to reducing carbon emissions, a tip for investors isn’t just to assess where a company is at, but where it’s heading with regard to reducing its carbon footprint.

“When looking at whether a company is prepared for the low-carbon transition, investors need to not only understand its current carbon emissions profile (how much it emits versus its annual sales, for example) but also where it is heading,” said BlackRock. “We think that while it’s important to identify companies already operating efficiently and emitting less relative to peers, there’s also benefit in identifying those companies taking their reduction plan seriously and making objective progress toward lower-emission targets in the future.”