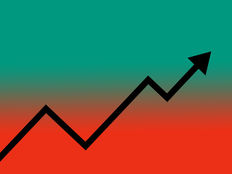 What Is Driving Investors to FlexShares' Largest ETF?

The largest fund in FlexShares’ ETF line-up has nearly $7 billion in assets under management, but what is it about GUNR that has attracted $2.2 billion in net inflows during the last year alone?

The FlexShares Morningstar Global Upstream Natural Resources Index Fund (GUNR A+) is one of the more unique products in the Commodity Producers Equities ETF Database category, driving relatively stable growth in both price influence and fund flows since GUNR’s inception in 2011.

GUNR focuses on the “upstream” portion of the natural resources supply chain, maintaining meaningful exposure to the water and timber industries along with positions in companies engaged in energy production, metals extraction, and agriculture, according to ETF Database.

The fund may have appeal as a way to establish “indirect” exposure to commodity prices. Since the profitability of the component stocks tends to move in unison with spot prices of the underlying resources, this fund should perform well when natural resource prices are on the rise, as seen in the current environment.

GUNR can be used in a number of different ways; investors looking to maintain a tilt towards commodity-intensive equities might find this fund to be a valuable addition to a long-term, buy-and-hold portfolio. It can also be an effective way to establish more tactical, short-term exposure to the commodity industry, according to ETF Database.

GUNR consists of many well-known stocks that are also found in other commodity-related products, such as Exxon Mobil and Chevron Corporations. With 122 individual securities, GUNR offers relatively deep exposure to the global commodity sector.

GUNR is tilted heavily towards mega-cap stocks, including big oil and major mining firms. The fund spreads holdings relatively evenly across the basket of stocks.

40.81% of GUNR’s holdings are U.S.-domiciled firms; other regions that the fund is exposed to include Canada, Brazil, Russia, the United Kingdom, Australia, and several others.

In terms of expenses, GUNR is towards the low end for this corner of the ETF market. The fund carries an expense ratio of 46 basis points, five basis points lower than the FactSet Segment Average, according to ETF Database.

GUNR has an annual dividend yield of 3.09%, according to ETF Database.